The Montana State University School of Architecture (MSU) Fabrication Shop created a site model for the reenactment of the destruction of Pompeii by Mount Vesuvius in AD 79. And RhinoCAM helped.

The site model is part of the exhibit, The Villas of Oplontis Near Pompeii, at the Museum of the Rockies that chronicles the eruption that destroyed Oplontis and Pompeii.

Using their CNC, MSU Instructor Bill Clinton and his students milled a topology map of the Bay of Naples out of high-density polyurethane foam. Their dynamic video animation of lava flow, volcanic ash, and pumice projects on to the topology map. Both architecture and geology students from MSU worked on this exhibit.

This Museum of the Rockies exhibit in Bozeman, MT, is the largest of the three venues in the United States.

This is the first, and probably only, time these artifacts will be displayed outside of Italy. The exhibit will be at the Museum of the Rockies through December 31, 2016.

More information on MSU’s links to the exhibit … 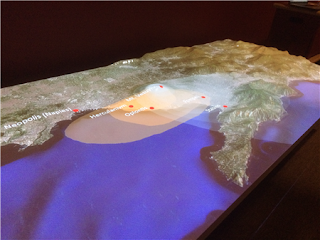 Site model of Mount Vesuvius and the Bay of Naples at the Museum of the Rockies. An overhead projection shows the lava and volcanic ash flow. 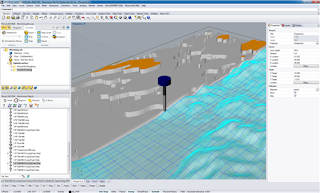