When I try to pick point location, drag the coordinates, select an object or rotate in the perspective view there is no immediate action. If I change something like the viewport mix the points or changes appear. I have Rhino5 64bit on a laptop and it seems to be OK. I don’t know if it is a Window10 problem or specific to Rhino on my desktop machine.

Sounds more like display driver to me.
If this was upgraded to Windows 10, then you have to upgrade yourdisplay driver too as the update does not do that.
If it’s a new system, see if there is a driver upgrade.
Hopefully it has a graphics card with OpenGL support that Rhino likes.

This problem just popped up after I was away on a trip for about 3 weeks. I also run corel17 and it works OK.

Go into Options > View > OpenGL and take a screenshot of that page of settings.
Post it back in a reply please

Not sure if this will give you the screen shot 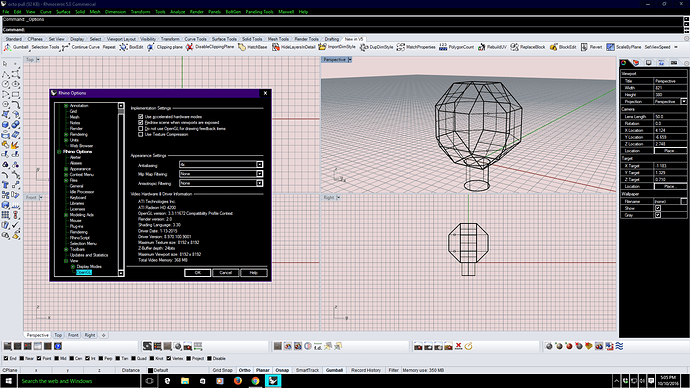 It’s very fuzzy and hard to read, but it appears you are running an unrecommended display adapter (Radeon) using old drivers from at least a year ago.

I would recommend first updating your drivers to the latest and if that doesn’t fix it, try changing the antialiasing setting to None.

AMD Radeon cards are intended for DirectX gaming.
Rhino does not use DirectX. It uses OpenGL. AMD wants you to buy their FirePro adapters for OpenGL based applications like Rhino.

It might work better with newer drivers and AA set to none.

I checked the display driver in Win10 and it said it is up to date. Further investigation shows that Rhino4 and Rhino5 32bit are working correctly, only Rhino5 64 bit is having the delayed mouse inputs. The graphics in my machine are intgrated on the motherboard. The strange thing is that 3 weeks ago everything was fine. I had installed dual monitors to make Grasshopper a little easier to use about 2 months ago and everything was OK. The graphics card has openGL 3.2.