Perhaps if the goal is to eventually have all documentation on git you could give some thought to designing a standardized page format that anyone at McNeel with a document to write could (and would) use, thus having it automatically dated when published? Even if it’s just a blank page with a standardized footnote space with the date in it.

Back on topic: Microsoft Visual Studio Community 2015 as IDE
If cross platform plug-in development is a priority then Xamarin Studio is recommended.

Thanks for the clear description above. Lays things out clearly. I’ve installed the vsix packages for Rhino and GH but It only installs the VB portion and not the C# templates. I’m running Visual Studio Community 2015 and VS express 2013, Windows 10. Is there anything I’m doing wrong? I tried unzipping the vsix file and placing the c# files in the appropriate folder but the template still didn’t show up.

I think I got the template working, unzipping, moving some files, and rezipping. It now appears in the proper location. But when I compile i get an error message. Any help would be appreciated! thanks 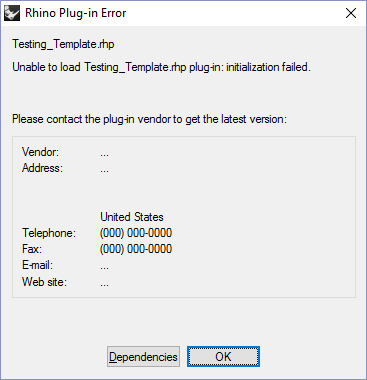 Was just following installing-tools-windows and noticed that this bit:

No longer appears to be up-to-date. Visual Studio Community 2017 displays this menu when installing:

Note that I checked Universal Windows Platform development and .NET desktop development. It’s been a while since I fiddled with this, but I assume that one will need at least these Workloads when developing for Rhino/Grasshopper?

Be sure to have .Net framework installed.I think it is not selected in your screen shot.

See this is why I try to stay clear of all this compiled business, dependency hell from the get go

Anywho, I already had several .NET frameworks installed on my system, good catch though for the updating the installing-tools-windows guide.

the page has been supposedly updated in Nov’ 2020, but it’s still the old 2017 and “typical installation” story. 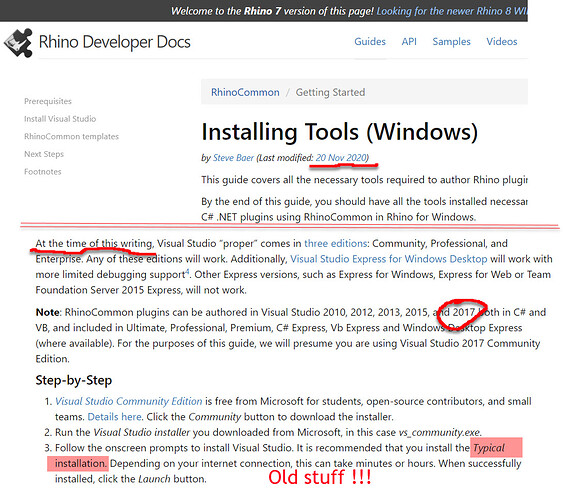 So I can either bloat my computer with useless stuff, or cherry pick whatever mentions C# or .NET or “framework”, hoping and paying they’ll be the right ones.

I’m using VS2017 day and night and having no problems with VS being “old”.

RhinoCommon seems to support .NET 4.8 and that means VS2017 supports RC very well.

I don’t know if VS2019 would actually add anything to the show (but as said, I don’t know that, because I don’t bother installing it since there’s no need for it).

If I need VS2019 for other purposes I assume I just install it and off I go.

Rolf, that’s not the problem.
This page is supposed to help beginners, not add confusion to an already overwhelming field.

Beginners can follow the instructions and they will do just fine.

I recently had a total windows crash, and so I had to reinstall everything, including VS. I Installed VS2017, although I could have installed VS2019. Why? Because VS2017 worked (and works) well.

So no confusion there. Installing VS2017 will work just fine. Part of the point is that if you don’t know if VS2019 works well, then don’t tell people to use it. So, all in all, the instruction as it is written now will most certainly work. That is the most important aspect with development environments, namely, don’t take chances. Don’t recommend anything which isn’t well tested.

Now I don’t know what McNeel has tested, but I don’t see any problem with recommending something that most certainly works, and works well (VS2017 = well tested).

I hope you see my point. The point is, get started developing with RhinoCommon, use VS2017 and off you go. If you want to use VS2019 and if it goes well, then good for you. Kind of. (It’s not like VS is a bug free thing which you can trust without testing if it actually works for your use case. I’m not saying it doesn’t work, but I wouldn’t bother trying mess around with it for no good reason as long as VS2017 works and no other requirements are pushing for using the newer version).

Experienced developers know what I mean.

Edit: I found one (out of many links) about people having problems with VS, so I’m not kidding you. Here a link to Casey Muratori giving up on VS2019 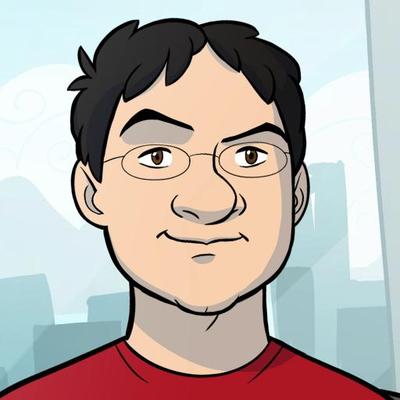 I attempted to install Visual Studio 2019 Community Edition. The installer went to 98% and then ran for sixteen hours using ~60% of 4-core 4.2gHz i7-7700K the entire time. Eventually I just terminated the installer task. https://t.co/VY84h2HGbV 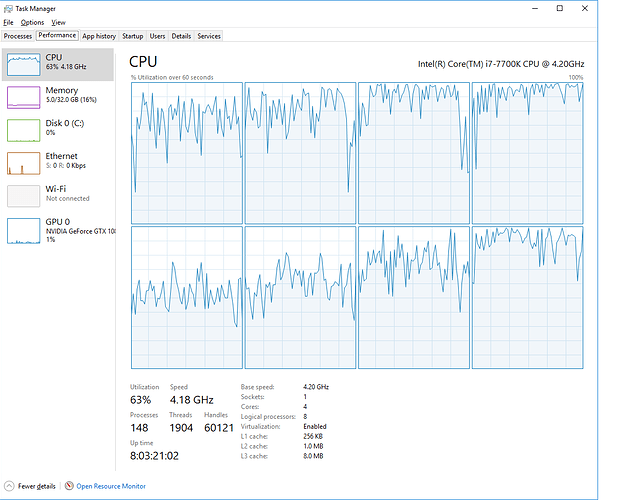 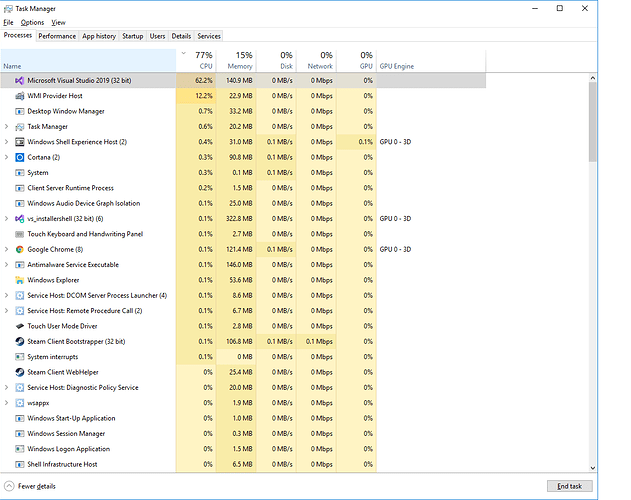 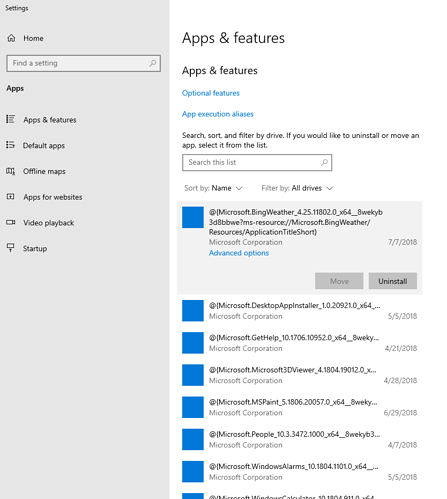 Rolf, as an experienced programmer, you know which modules to install and those not to.
That was Ander’s point : the older 2015 version of VS had a “typical installation” as specified , but 2017 an 2019 have endless optional modules which are daunting to the beginner.

Have you actually read my post before starting off your novel ?

probably only the “last modified” date…

Well, apparently you missed the black bar at the top that says “Welcome to the Rhino 7 version of this page! …”.

C’mon, @stevebaer. Don’t you do your own VS installs and updates? Haven’t you come across this: 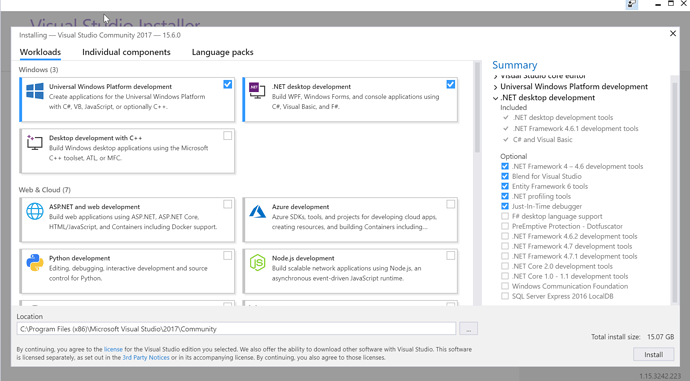 It’s clearly a major difference from

Perhaps it’s time to do a major rewrite of the body.

It might be of interest to some users that while it is possible to do an offline installation of VS 2017 (and I presume 2019), the process is a closely-held Microsoft secret discoverable only through a deep dive into MS’s support info. And running it offline means you are on your own: the help is only available online.

Yep, looks like that page needs a rewrite. Funny that it’s attributed to me; it’s probably based on a wiki article I wrote many moons ago.

Until I get this updated, I would recommend using VS2019. The “.NET Desktop Development” workload is what you should install.

The “.NET Desktop Development” workload is what you should install.

Well, I also installed the “Universal Windows bla…bla…bla” and the .NET framework 4.8 , following this post.

Was that useless ? Can I get rid of the un-needed stuff ?
Arrrrhhhhh !!! I hate this whole C# programing endeavour already !

Universal Windows Platform is not something that Rhino uses Learn about Universal Windows Platform (UWP) apps that can run across a wide variety of devices that run Windows 10.

you know which modules to install and those not to.
That was Ander’s point : …
Have you actually read my post before starting off your novel ?

I didn’t see anything about “Ander’s point” when I read starting from your post, which the (new-post-) notification linked directly to.

2021 here, the page has been supposedly updated in Nov’ 2020, but it’s still the old 2017 and “typical installation” story. [Not up to date] So I can either bloat my computer with useless stuff, or cherry pick whatever mentions C# or .NET or “framework”, hoping and paying they’ll be the right ones. I wonder what was “updated” exactly on this page… probably only the “last modified” date…

Yep, that’s the problem : not understanding the context, thus wasting your and everybody else’s time.

Speaking of Visual Studio 2019, it is evident that, if one installs ALL the modules because he has not been properly guided, the install size and time will be monstrous.

Yep, that’s the problem : not understanding the context,

Yes, that’s what I’m saying, I didn’t read anything which I didn’t perceive as a wider (or earlier) context. What I saw was an angry poster, and the following (misleading?) focus on what made you mad (see picture). Don’t miss it, it draws focus to VS2017, and “Old stuff!”, and that combined with the mood of the post appeared to silly me to be about just that, about old stuff, about VS2017. 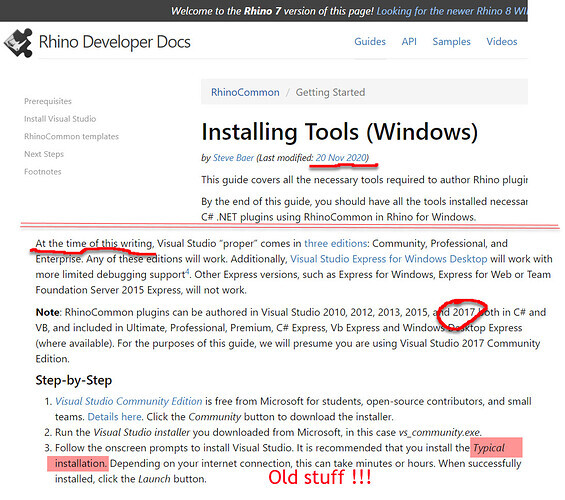 Now I learn that I was totally wrong. It had nothing to do with the highlights, only about everything else. Sorry about that.