I dont know what i do that my mesh modification is randomly canceled when manipulating with blocks.

I dont do anything intentionally to turn off the pipe modification. It keeps happening. 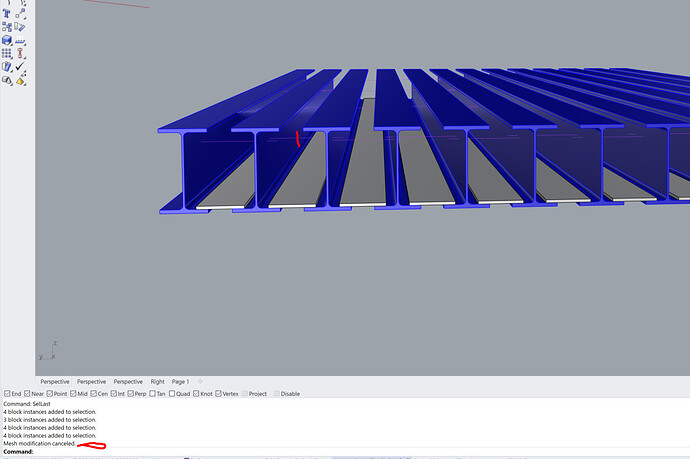 Rhino plugins that do not ship with Rhino
C:\Program Files\Chaos Group\V-Ray\V-Ray for Rhinoceros\V7\VRayForRhino.rhp “V-Ray for Rhino”
C:\Users\ivan_galik\AppData\Roaming\McNeel\Rhinoceros\packages\7.0\Acapulco\1.0.4\Acapulco.rhp “Acapulco” 1.0.0.0

Hi Ivan -
Are you saying that you have a curve that has Curve Piping enabled and that you turned into a block, but somehow Curve Piping gets disabled?

In a quick test here on Rhino 8 without V-Ray and Acapulco, I can’t make that happen.
-wim

Hi Ivan -
I’ve spent more time on this but can’t reproduce the behavior that you are getting.
If it’s somewhat easy to reproduce on your system, please try with the external plug-ins blocked.
Apart from that, I’ll need some more concrete steps and, perhaps, a file.
-wim

ok i will post an update when i catch it

It happened again. I was just working in layouts not manipulating with the model at all and suddenly i realized some of the blocks are missing mesh modifications…

@ivan.galik - did you send us a file? If not , that wouyld be helpful - the develloper would like to have a look. Please include a link back to this topic in your comments, as well as anything you can about how to make the problem occur.

Hi Ivan -
Does this also happen when all 3rd party plug-ins are disabled and you are not running Grasshopper? We’ll need to be able to reproduce the issue to trace in the code where this is happening.
-wim

It is pressing escape that cancels and disables Curve Piping. It happens very easily in Rhino because escape is used for other purposes too. And it also happens when other application is active. I’ve logged an issue for improving this: https://mcneel.myjetbrains.com/youtrack/issue/RH-72550/Escape-turns-off-mesh-modifiers-too-easily