The attached make hole example file fails.
It was a curve imported from Illustrator.
It seems to be a normal curve but won’t work until I rebuild it.
Can someone explain why it fails? I would like to know what to avoid in the future.
Thank you
make hole failure.3dm (36.5 KB)

@pascal, using _SimplifyCrv on this curve followed by _MakeHole crashes Rhino5 and the WIP. This should be flagged as a bug.

@MSavage, zoom closer to the curve in the areas marked below, it has some self intersections or foldovers with stacked controlpoints. 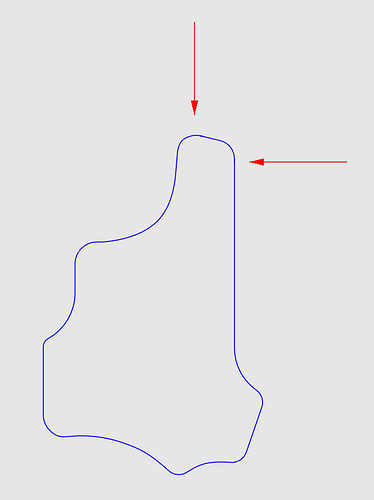 Hi Michael - the curve has stacked control points at the ends of each segment… Rhino does not care for that.

Thank you Pascal for the quick response.
I have noted that Astute plugins for Illustrator sometimes does that.
How did you check for stacked control points? Is there some obvious notation that I am unaware of?
MS

Hi Michael - I turned on CurvatureGraph initially, and saw some spikes and ugliness even at a low scale - that is usually a hint to look closely at these locations on a curve.

You can also try this script - an old thing but it comes in handy - if you save the file and drag and drop it onto Rhino, you get some new aliases that run the script:
SelStacked
StackedPoints - marks where stacked points are.
RemoveStackedPoints (not recommended here, it changes the shape a good deal and orders the new points in not such a good way, I’d ignore this one…)

Thank you Pascal and others for your insights.
I was locked out of this forum for a bit (no explanation) so my gratitude might seem late.