Bumping…I just got Rhino 7 and have the same issue.

Is this on someone’s radar at the home office?

Same here on Mac for Rhino7 v7.5, …whatever is Rhino Zoom factor, GH is the opposite.

Ok, don’t ask me why, but if I enter a negative value to my zoom scale factor in Rhino, then GH behaves the same for zooming, cool

@dogrocket and @brock you may want to try this on your machine? 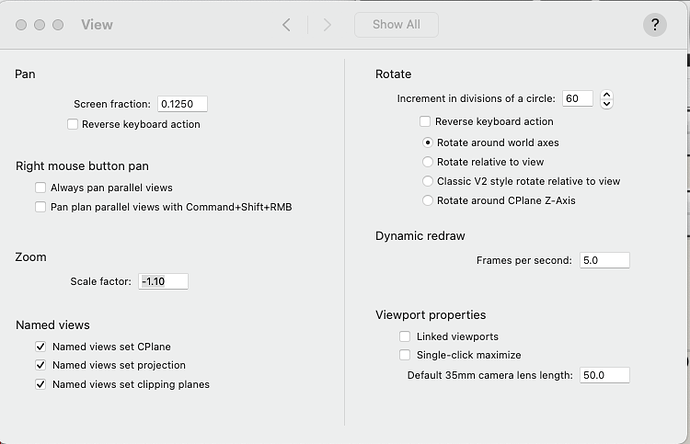 nice @Balazs_Kisfali, well the negative value only inverts the Rhino zoom direction, but with this, both Rhino and GH have a wrong zoom direction…

@dan any news with the Grasshopper zoom direction?

It was always madness to get used to the workflow of each platform again and again with the scroll-wheel zoom and the way to delete components(because of Bootcamp).

Related to WINDOWS Bootcamp, Rhino use backspace key as delete by default, but on grasshopper we need the fn key to delete. Maybe is just to allow the backspace key on the edit shortcuts please. @DavidRutten. any news with the Grasshopper zoom direction?

Sorry for the delayed reply. I presume you mean this issue:

No progress, unfortunately. (You can star the issue on YouTrack to get updates when it budges.)

grasshopper we need the fn key to delete

I don’t recall why this happens for some people (my memory is fuzzy, so I think someone could fill me in again), because delete works just fine in Grasshopper in Rhino for Mac (7.7). No need to hold down the fn key here…or maybe I’m misunderstanding, you’re talking about Rhino for Windows in Bootcamp using a Mac keyboard?

Thank you @dan for your response, Related to the zoom direction. I temporarily fixed it by first changing the scroll to “unnatural” with scrollreverser (To fix the GH direction), Then in Rhino using the scale Factor -1.1.
With this, GH, Rhino and all the device have the same scroll direction as Windows.

Rhino for Windows in Bootcamp using a Mac keyboard?

Yes, this is a windows issue with a mac device, why edit shortcuts don’t allow to use of this key?

The opposite happens on grasshopper for mac too.

Hi, The Delete button on the full-sized Apple keyboard doesn’t seem to be supported for removing components from the Grasshopper canvas in the latest version of Rhino. Instead Backspace is currently used. Would you consider making Delete accessible for deleting components too please?

Ha! Thank you for this, I missed it over a year ago, but just tried it and now, for the first time in forever, both Grasshopper and Rhino are zooming in the “natural” direction that I have set in my Mac preferences (and that I vastly prefer, for everything).

Of course, I still think it’s a problem that Rhino for Mac doesn’t respect the Mac settings, but at least I know have a workaround. Thank you!!