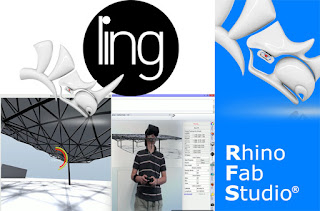 lingMatrix is a Rhino plug-in developed for VR modeling for Architectural designers. As proof of concept, it bridges the Oculus DK2 and the Rhino 5.0 sr12.

lingMatrix is an application product of an Architectural Master Research Project presented in The University of Florida. It is currently tested only on Oculus Runtime 0.6.0.1 beta, Rhino 5.0 sr12, and Windows 7/8.1.

What is a RhinoFabStudio? A RhinoFabStudio™ (fabrication studio) is a small-scale digital workshop, certified by McNeel, with an array of Rhino and Rhino compatible software and computer controlled tools and training. These tools cover the various leading-edge industrial methods and materials needed to design, analyze, and fabricate almost anything.