Being able to print multiple page PDF is a great update in R6, but unless I’m being dumb, right now it’s almost impossible to create long list of layouts by having pre-drawn sheet size in the model space without a plugin like LayoutManager?

A scenario where such functionality is helpful: complex geometry tower architecture design, parametrically generated floor plans for each floor and it’s sheet boundaries, need to batch create (sometimes 20+ or more) layout for each floor, control scale and alignment, and sheet size.

Since LayoutManager and Fabtool hasn’t been updated for R6, I’m wondering if people have found alternative plugins and grasshopper component that can help them manage layouts better?

If not guess we will have to script something ourselves, has anyone tested writing a script for that via Rhinocommon that will be able to control scale, zoom to fit selected object, batch nameing, or have scale fixed and choose alignment methods?

Since LayoutManager and Fabtool hasn’t been updated for R6

Are these tools not working in V6?

Well, as far as I know, Layout Manager doesn’t work with V6 (and it has several fatal bugs in V5). FabTool for GH works in V6, but also not 100% reliable. And you don’t have such a control over your layouts.

I just downloaded and installed LayoutManager in V6 (SR9) and it appeared to work. I don’t know how to use it so I can’t test the features, but I didn’t run into any initial problems.

I am sorry Steve, how did you install LyoutManager in V6? I have both V5 and V6 and LM works only in V5…no V6 version available, or I am missing something

There isn’t a different version of layout manager. I just double clicked on the rhi that I downloaded and layout manager was installed in both V5 and V6

well, I also just double clicked rhi that I downloaded -> results in this 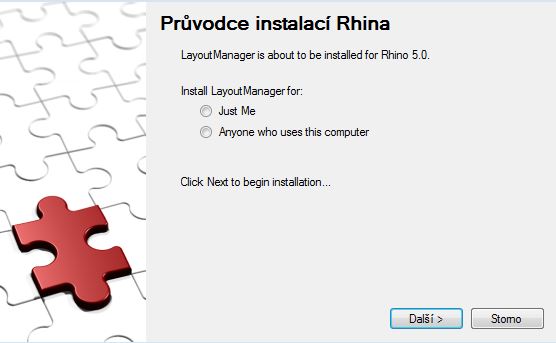 @will may need to help here. It sounds like the V5 version of the Rhino installer engine is running when you double click on the rhi instead of the V6 version.

Yeeees, I got it…now I have it in V6 - nevertheless…the reliability of this plug in is…well not sufficient. It shows odd dimensions of sheet, renaming and moving sheets is impossible, it crashes sometimes…so I wouldn’t call it functional plug-in right now. Even though i like the idea so much, because there is no other tool (rhino built or plug-in) which could replace it. And it is pity.