Layers Panel - how to change the column sequence?

I cannot be certain, but it seems to me it is no longer possible to change the sequence of the columns in the Layers panel. I like to have the Layer Color and Current columns as the first two, so I dragged these to the preferred position. But closing and reopening Rhino sees them returned to the default position. I believe earlier Rhino-versions did save the panel layout, but I am not sure. My current version is 5C254.

As a sideline: double clicking a .3dm file in the Finder opens RhinoWIP, not Rhino5.2, does anybody know how to change that?

As a sideline: double clicking a .3dm file in the Finder opens RhinoWIP, not Rhino5.2, does anybody know how to change that?

Right-click on any .3dm file and select Get Info. Look for the Open with section and change to Rhino WIP, then select Change All. This changed back to Rhino 5.1 a few releases for me and i had to change it to Rhino WIP. 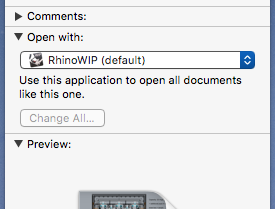 But closing and reopening Rhino sees them returned to the default position. I believe earlier Rhino-versions did save the panel layout, but I am not sure. 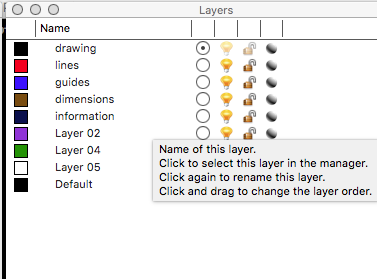 Thanks for the tip Rudi, all my 3dm files open with 5.2 again.
But the column sequence thing is getting mysterious. My WIP version is 5D64w like yours. This happens:
I open 5C254, move the Layer Color column to the 1st position. Close 5C254. Open 5C254: the column is still in 1st. Close 5C254.
I open 5D64w, the Layer Color column is in 1st position. I move the Current column to 2nd position. Close 5D64w. Open 5C254: all columns are back to the default position!. Close 5C254.
Open 5D64w: same result, all columns back to default position.

Hi @maxz I just installed a new Rhino 5.2.1 and it installed the layers palette columns correctly from the WIP.

I moved a column, saved then closed Rhino 5.2. I now opened in Rhino WIP and all is as it was in Rhino 5.2

I haven’t seen it reset to default yet today. I hope it works out for you!

I can repeat my experiment umpteen times, and the Layer Panel columns keep slipping back to their default position.
I wonder, could it have something to do with Layouts? I have been experimenting with those lately, also in the file with which I have been testing the above phenomenon. So I have just tested a file without layouts, and the layer panel columns stayed put as they should!
@rhinorudi: Randy, maybe you can add a layout to your drawing and repeat my experiment?

Randy, maybe you can add a layout to your drawing and repeat my experiment?

@maxz I think you’re onto something here regarding Layouts. I think I have steps to reproduce what you are seeing…just double checking before I get this one on our list.

@maxz Does this look like what you are seeing? (MR-2851) Your Layout hint gave me a clue.

It seems to reset to default if I use layouts, similar to what Dan is describing. I have never worked with layouts, though there has been discussion here to start to use them for some specific jibs.

@dan Not quite, Dan. I noticed a similar behavior when hopping between Rhino versions 5C254 and 5D64w. I did not create any new Layouts or made changes to the Detail Layers Panel, I only changed the column sequence in the Layer Manager Panel. The mere existence of Layout details seems to cause that sequence to fall back to its default.
But as long as I stayed with version 5C254, the column sequence remained as I altered it after closing and reopening Rhino.

Yeah @maxz, I think I captured how to reproduce it in the bug report above…I think we’re just saying the same thing two different ways. I think what is causing it is just having the Layout window open once and have the different “view” from a layer-manager derived panel appear. Without any investigation of the code just yet, I’m speculating that when the layout manager’s version of that view appears, it saves the column orders. You don’t have to create a new detail or even do anything in the Layout window, just open it once. Conversely, as I think you’re just reinforcing, if you don’t open the Layout window, the bug does not appear. I think we have enough to go on…unless I’m confused.

Thanks again for the clues,
-Dan

You don’t have to create a new detail or even do anything in the Layout window, just open it once.

Dan, the Layout window opens automatically on opening the model (which I am not happy with, it slows working in the model down, see my other thread ) but as long as I am not switching to another Rhino version, the column sequence stays put. So I would say it is not related to the detail Layers Panels having a different column sequence.

I am a bit disappointed that the bug is still there in 5.2.3…

This bug should be fixed in the next RhinoWIP (as well as in the next update 5.3 to the main commercial product).

Ok, this bug ought to be fixed in the latest RhinoWIP …please give it a try.

Hi Dan, I have tried it and it seems ok. In order not to confuse matters I stayed with 5D177w and did not hop to 5C262 this time. All looks well, and I also was pleased to note that the Layouts window did not open automatically on opening a design file anymore.
The only thing that I noticed is that the Layers (NOT the detail layers-) inspector panel in the Layouts window did not follow any changes to the column sequence in the Main window immediately, you have to close and reopen the Layouts window to get it to update. But that is not a real issue, for me at least.

Thanks for testing this Max and for being patient for the bug to be fixed. We’ll get this into the upcoming 5.3 update to the commercial product soon.