I’m really surprised by this bug because it’s such a fundamental feature.

Under the business layer, collapse 2 and 3 so you can’t see the sub layers; try to move 2 between 1 and 3. Crashes reliably; does not seem to crash if they are not minimized.

Thanks for reporting this behavior. I am not able to reproduce the crash given the instructions you have provided…I am able to move 2 between 1 and 3 without a crash… 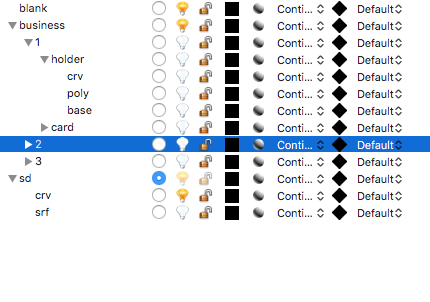 Can you please let us know what version it is crashing in? I was testing on the latest RhinoWIP, on OS X 10.11.6.

Also, as a shortcut, you can send your system information (Rhinoceros > About Rhinoceros > More Info… > Copy to clipboard…) and paste it in here. It might be helpful for us to understand if there is something about your config that is causing the crash.

Let’s get to the bottom of this,
-Dan

I’ve downloaded the file I uploaded and tested it. Can confirm this is still crashing for me.

I’m using the latest Rhino, updated after the first time this crashed.

It would be helpful if we could see the complete contents of Rhinoceros > About Rhinoceros > More Info… > Copy to Clipboard. This might provide more clues…but it might not.

Thanks for the detailed System Info. Interesting that you have a CUDA kernel extension installed but have the Integrated Intel HD Graphics 4000 GPU. I doubt this is related, just worth noting.

Also, thank you for taking the time to update OS X.

Hmmm. Let’s make sure we’re both taking the same steps.

Here is what I am doing to (attempt to) reproduce the problem:

So, what are we doing differently? It might make sense to use Quicktime Player > File > New Screen Recording to show what you are doing.