I tried to reopen one of the definition you posted there : knotrepulsion.gh (16.8 KB), and could not run it. R7 seems to have a weird behaviour as it runs perfectly on R6. Do you have any idea what could the problem be ?

Thanks a lot.
Best,

It’s starting to get really weird…
Trying another definition (Kangaroo-Soap film and bending rod.gh (21.7 KB) ), I encounter the same behaviour. File is working perfectly fine on R6, but can’t run on R7.

The problem seems to come from the Rod component. If I just run the file, it works, but if I modify anything from it, I have to copy/paste the same Rod component from a copy of the file to get it working. No idea what’s going on…

The issue with the C# component is likely due to referencing the Kangaroosolver dll from the R6 directory. You need to make sure it is pointing to the same one being loaded by the version of Rhino you are running.
The rod issue looks like something else though. I’ll investigate.

Yes of course it was still referencing from R6 directory, silly me!

@DanielPiker, could you explain the difference between the Angle and the Rod component ? Is the rod one just a way to avoid needing the shift list, or is it doing something different ? Maybe a combination with the Length one ? Thanks !

The Rod component is indeed just the same as using Angle between consecutive segments and Length on each segment of a polyline.

Okay thanks, I’ll work with this then, while Rod is weird 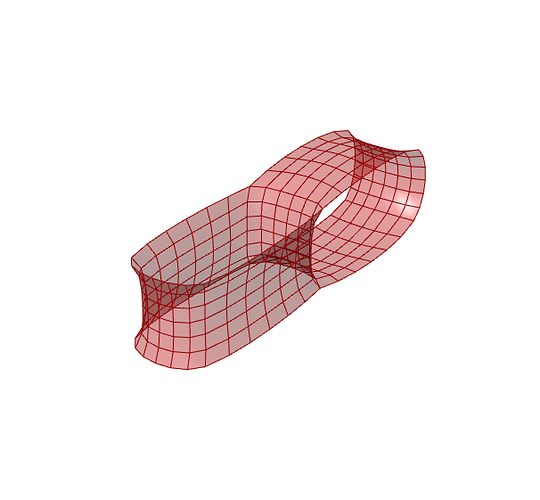 Sadly that’s not the problem… I use the button instead of toggle because it’s too laggy on the Mac otherwise. Also in the definition you sent, you input lines to the Rod component which is not really effective. For it to understand the input as a proper bending and stretching resistant rod, you have to input a polyline.
What is working however : plugging and changing the params of Rod, and then plug the polyline. I have to delete the component to change values however, still weird ! Might only be a Mac-related problem ?

you have to input a polyline.

pardon my amateur eye,
went for eye-candy and didn’t solve anything important

I have to delete the component to change values however, still weird

Maybe share a screenshot of the errors? Or of what you’re wanting the mesh to do?

Is it still related to this:

I tried to reopen one of the definition you posted there : knotrepulsion.gh (16.8 KB)

Well, thanks for having looked anyway !

Is it still related to this:

Not really, it was another problem mentioned, about the Rod Kangaroo component, but never mind, it’s fixed now in Rhino 7 SR4.

Also, I don’t know what you did, @DanielPiker, but there was a great improvement in Kangaroo with macOs with this update, it’s really nice !