Is unioned geometry lighter than separate pieces? e.g. A table with four legs that are all different so cannot be blocks. If the legs are unioned to the tabletop making a single poly-surface, will that geometry be a smaller file than one made up of the table top and four separate legs?

Hello - I guess it would depend on the details - if the Union introduced complex trim curves then there may be no gain from the reduction in the number of objects; similarly, if the inputs are extrusions they will be compact but will become breps after the union… In any case, I doubt there will be a useful difference either way most of the time.

Thanks Pascal. Damn it, now I have to go learn what a “brep” is.

For practical purposes, brep= surface or polysurface in Rhino - but as distinct from say, an extrusion object or a surface of revolution, which are defined more compactly. Once these simpler objects are trimmed and joined etc, by the union, the result is a brep, not any of the simpler forms…
-Pascal

Question:
What is this model for that it needs table feet to be a monolith object with the other part?

If it is for visualization purposes why not extract the mesh and boolean that. Then the model be even lighter.

The table was just an imagined example. I was actually working on one of my blocks in a larger model. (pic) The 4 uprights were originally blocks, but eventually each need to be slightly different. (I have this situation happening a lot in the model.) I’m just trying to find ways to make it lighter and wondered if single poly-surfaces were lighter than multiple parts.

I’m not familiar with what you suggest or how it will lighten things, but I’ll experiment. 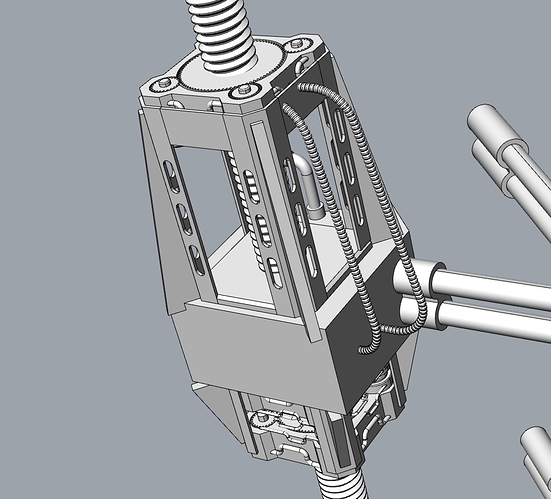 I would not make booleans in this case, nor switching to mesh. This is a detailed model. You’ll probably extract production information out of that.

Sometimes booleans may create bad geometry and ruin your model if left unnoticed.

Maybe you can use Rhino worksessions and move these parts in another Rhino file and add it as external reference.