Input a Transform into Hops

Does anyone know how to import a transform data type into hops? It doesn’t look like it’s supported yet but maybe someone knows a work around.

I don’t think there is a workaround currently for this, but I’ve added a YouTrack issue for this. I will try to add this as soon as I can.

Thanks Andy. Ultimately, I want to use hops to create a component that lets me transform blocks from Rhino. I already have a script that allows me to do this, but I just need a way to transfer the transform into hops. I also know there are some components available that do this, but it’d still be nice regardless to be able to use hops.

Could you pass numbers into the Hops definition and then do the transform based on those incoming numbers?

I’ve tried converting the transform to a number or text and then back to a transform, but I haven’t succeeded with that yet. Do you know of any ways to “deconstruct” a transform?

Transforms broadly cover a lot of different transformations including translation, rotation, scaling, etc. But basically all of these functions can be handled using a Transform Matrix. The image below shows a Move transform where it moves an object up in the Z-axis by 10.0 units. The transform can be shown as a 4x4 matrix which can then be deconstructed into a list of 16 values. You could pass those 16 values in as a list of numbers and then reconstruct the matrix back into it’s transform inside the Hops definition.
Transform_Matrix.gh (7.4 KB) 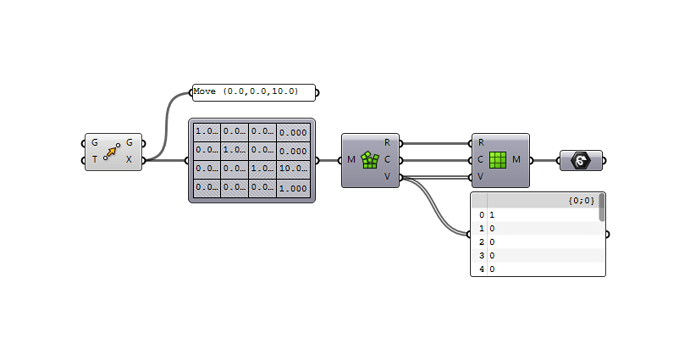 Awesome! I can totally work with this. It might just get a bit complicated when trying to pass in a list of a transformations, but I’ll be able to figure something out. Thanks again!