How to select only full diamonds within the geometry (grasshopper)

I am playing with the diamond panels, where I want to create a diamond pattern in a geometry that I have design before but there is a problem where I only want to select the full completed diamonds within the same volume as the entered geometry.

If any one really has the kind time to help, I would really appreciate it in helping me solving the enigma.

Your .3dm file is R7 so can’t be opened in R6. Can you use ‘File | Save as’ to make an R6 copy please? Or internalize your geometry in the GH file.

Oops, I can’t use your GH file either. Oh well.

Without Lunchbox I came up with an approximation of diamond panels (white group) and mapped them to one of the two faces (surfaces) of your brep, untrimmed which revealed a single surface wrapping all the way around? I split that surface and culled portions with less than four edges.

There are a couple of issues with the seam but it turned out better than I expected.

Your brep is internalized, no need for the Rhino .3dm file.

Here are some recommendations I have for you.
Your base geometry is an open brep, i.e. poly-surface. In addition, it consists of a trimmed surface. Both are not very good when using the Lunchbox panel.

Part of the seam problem was simply connecting the wrong wire to Bounding Box.

Next was an anomalous spiral curve introduced by SrfSplit that was fixed by using Pull Curve just before it.

Then I found one triangle that wasn’t being culled due to a tiny extra “edge”. This was fixed by the yellow group, joining the edges and counting discontinuities instead of edges.

Finally, the triangles along the seam needed to be included so added the cyan group to do that.

No plugins, geometry is internalized.

I understand the transformation of the open brep but do you know if there is a way to obtain more more interior edge curves from using “open edges”, in order to achieve a more accurate shape from the original geometry?

Much thanks for all the help

in order to achieve a more accurate shape from the original geometry?

This is a tediously meticulous effort to cope with the two irregular trimmed “faces” (surfaces) in your original shape. Setting the slider in the purple group (minimum perimeter length) requires human judgement as it will change if the size of the diamonds change. 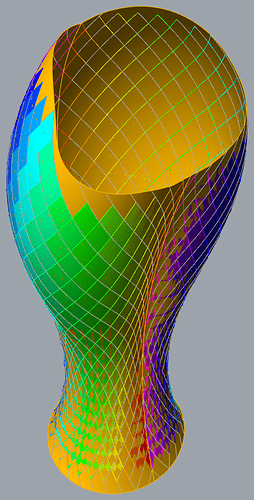