How to fit in the neighborhood 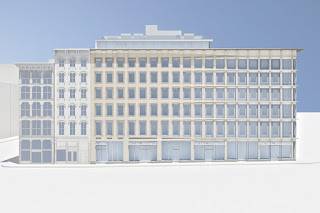 It is refreshing to see architecture that considers its surroundings. For the Soho neighborhood in New York, BKSK could have just stuck in a statement building – a fine piece of architecture, but not necessarily compatible with its neighbors. Instead BKSK blended with the historic neighbors, echoing at one end the small punched openings of the 1850 building next door. Then the design transitions to the large windows of a curtain wall, echoing the 1872 cast iron building also near by.

BKSK used a variety of software, including Grasshopper, to design the facade modulation.

Details in The Architect’s Newspaper…