How to define multiple Wind vectors at multiple locations for Kangaroo?

I’m designing a skyscraper for a university project and I want the wind force to sculpt the building’s façade, something like this: 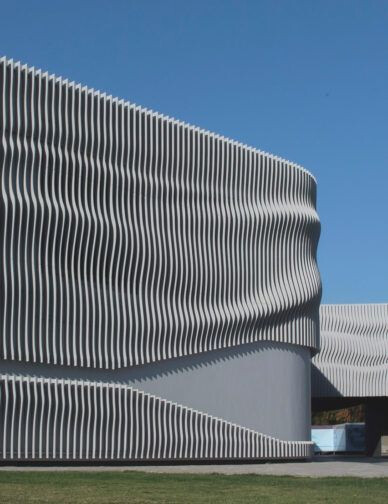 Is there anyway to define wind forces at different locations and more localized influence?

That looks to me like an artist’s representation of wind rather than based on real wind data patterns.

It can be accomplished using attractor curves to sculpt the wave shaped bumps, raising points (from divided vertical lines) normal to the base surface by a value based on proximity to the nearest curve.

I know that this exact effect can be easily recreated, but in this case I want the wind simulation to do it, Physics based form finding and all.

in this case I want the wind simulation to do it, Physics based form finding and all.

Perfect is the enemy of good
– Voltaire

Form finding is the title of my project

The skyscraper is 66 stories tall and I’ve done all of the climate studies, I can’t just arbitrarily draw some lines on the façade, I have to show the physics simulation and how the wind is shaping the building.

The Wind goal in Kangaroo is a pressure on the faces of a mesh, which varies according to the angle between each face and an input vector.
If you’re thinking of the ripples of something like a flag in the wind, those can happen even when the wind has perfectly constant and uniform velocity, just from the interaction between the momentum of the cloth and the steady wind.
The pressure on the different parts of the fabric depends on their angle to the wind, and as they change orientation due to this pressure, the pressure changes, and so on. Because the parts of the fabric are connected, they also pull each other, and the resulting motion can be complex and periodic or chaotic.

I think you need to be clearer about your aims though. What are you trying to optimize for? Or are you just after a particular look? Why would a rippled surface that looks like a flapping fabric be any better for a skyscraper than some other shape? You could use CFD software to simulate the vortices, but what would you then want to do with this information?

I realize I was using too high of a strength value for the “Length(Line)” Kangaroo component and that was why I wasn’t getting any variation in the façade and it was acting like heavy leather. Everything is working now.

About my aims, I’m trying to optimize between form efficiency, structural predictability and aerodynamic properties. I’m using a simple cube as the base geometric form to achieve first two goals but while trying to preserve these goals, I want the building to be as aerodynamic as it can be as it’s a very slender one with a width to height ratio of 1:8.7 . Hopefully this simulation will create a number low resistance airways for the wind to flow through without implying it’s maximum force to the structure. But I need to fully simulate the wind with OpenFOAM to prove it.