I am currently trying to develop a folding origami structure using Rhino as part of my final project for my masters. I have managed to create the middle of the shape and to create the folding motion. However, I have not been able to add the corners of the square to the shape. I have tried creating the points and using the move tool, however, when I turn it into a 4 point surface, the surface is not planar due to all the points not remaining in the same plane as they move. I think that it would work if I could create the point using the lines that already exist on a plane that has been referenced to the surface.
I want to create a line that is 115 ° from the highlighted line, starts at the end of the line (point 3 in the image), is on the plane shown and is 4cm long. I then also need a second line that goes from that line to the point highlight (it would need to be at a 90° angle from the previous line built)

Any help or ideas of how to create that line would be much appreciated, this is the first time I have ever used Rhino and Grasshopper. 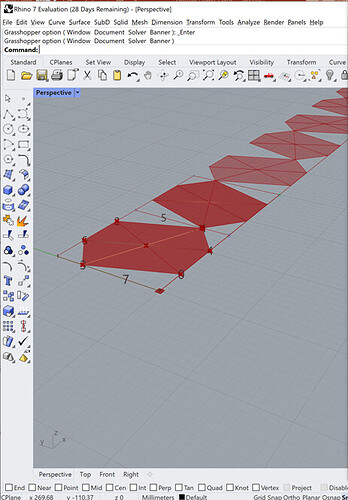 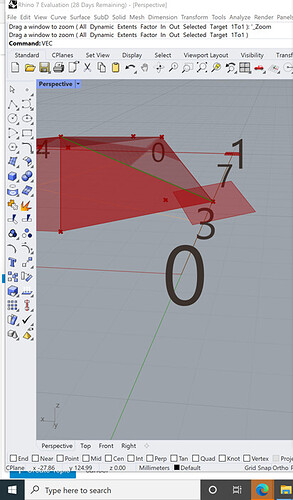 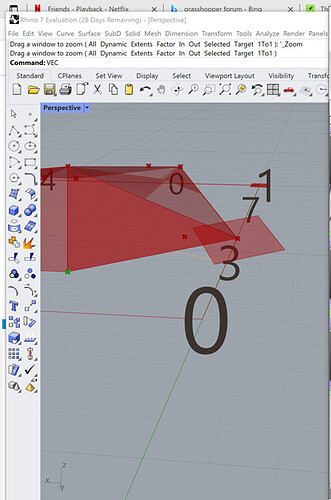 Since you post here I assume that you know a thing or two about coding.

So get the attached (and modify it accordingly):

This issue of yours may (or may not) have a solution.

BTW: Obviously one can use the classic Rotation Method where plane ZAxis is the rot Axis and rot Center is the refLine.PointAt(at).