The senario:
I like to move B object using A as a reference, but I don’t know the coordinates of A .

What I tried:
I tried the Move command.With the Move you can adjust B from current position to destination.

Why just not align(move) A to B than again move A from there?
What I am trying is adjusting the distance between two surfaces in one object, and I found Rhino does not allow me to do that.

Hello - hard to say without an example but I think the ‘From’ one-shot Osnap is what you need here.
https://docs.mcneel.com/rhino/7/help/en-us/index.htm#user_interface/object_snaps.htm?

Thank you for replying!

I just realized there are two types of objects when you extrude a curve(eg. a closed circle) to a solid.

So I might need to ask my question more specifically:

Let’s say there is a ring(closed solid polysurface) in space(random coordinates).
I like to adjust the distance from the selected surface to the bottom of the ring(they are parallel).
But I don’t know the thickness of the ring.

I think directly adjusting the distance between two objects is very intuitive, but seems like in Rhino, this is separated in at least two steps, moving A to B, then moving A from B. So I like to ask if there is one step method to do it.

English is not my native language, Hope I made myself clear.
Thank you! 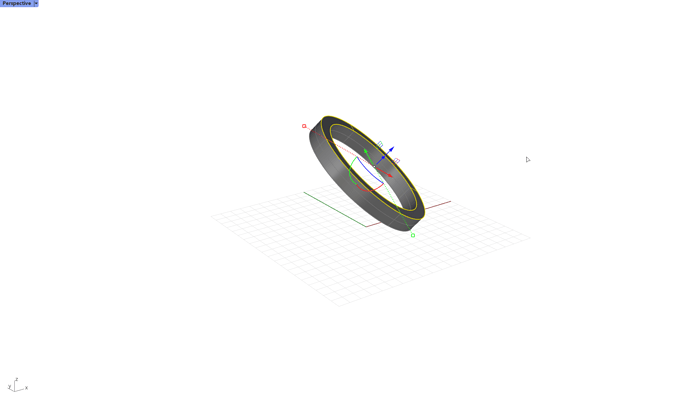 Using the From osnap: select the face you would like to move, start Move. Snap to a Quad or Cen or End (on the vertical seam of the cylinder) as the ‘point to move from’ and then when promted for the point to move to, start the From osnap and snap to the corresponding location on the face that is not moving. Type in the distance you would like for the new thickness of the ring - then snap to the same starting point

This is exactly what I am looking for!
Thank you!