At Mecklenburg-Western Pomerania, Germany, port renovators discovered several shipwrecks on the harbor seafloor. It was an exciting discovery as the wrecks’ timber were almost perfectly preserved, with practically no bacteria or rot, and no woodworms, as the silt environment was so anaerobic.

One ship was a flat bottom ship. Another was a strong cargo ship with a square sail, built to transport heavy loads around the Baltic Sea region. The third shipwreck was a pointed, Viking-style ship. 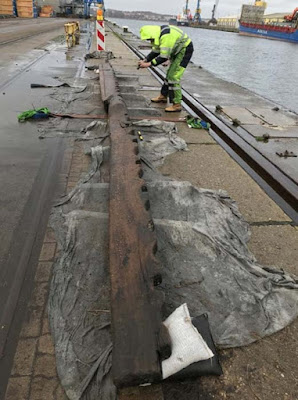 Above: 3D scanning the Viking shipwreck

A team of specialists had to work fast to preserve the details and document the shipwrecks. The formerly silt-covered timbers were now exposed and vulnerable to damage. After lifting the wreck from the harbor floor, the team needed to clean, scan, process, describe, annotate, and photograph 228 timbers—in one year.

Every day, seven timbers were prepped for scanning. Two of them were patted dry and scanned one at a time. The remaining five others would wait under wet cloths, as exposure to dry air would cause the timbers to buckle and rupture.

All four sides of each timber were scanned with the professional 3D scanner, Artec Eva. The scans were processed and turned into full-color textured meshes in Artec Studio.

From there, the scans were exported as OBJ files to Rhino 5 for annotation. 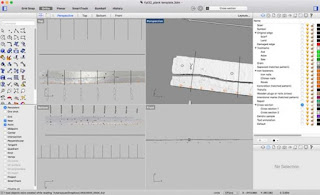 Maritime archaeologist and 3D recording specialist Thomas Van Damme of Ubi3D explained the process, “In Rhino, each characteristic of the timber was fully annotated, via the PolylineOnMesh feature, stored on separate layers, in precisely the location where it was found on the wood. These notes included details on every cut and chop mark, all the nail holes, each and every little scratch, the wood grain itself, what kinds of nails were used, whether they were iron nails or wooden treenails, which tools were used for construction, if there were signs of repairs made, what kind of wood was used.”

“In the past, all edges of timbers had to be traced using a contact digitizer which was very time-consuming. The nice thing in our approach is that Rhino has tools which automatically convert the annotated scan into a technical drawing. So, the 2D line drawings are essentially generated automatically from the annotated scans, without us having to trace all the timber outlines.”

The results produced valuable information for both research and education.

See the details of this project from Ancient Origins …