Hot reload in VS not working with ETO forms?

I tried it with normal commands, adding 123 to the command with HotReload.

But with the ETO panels I couldn’t use Hot Reload to apply quick changes. e.g. here I would like to remove the 123. 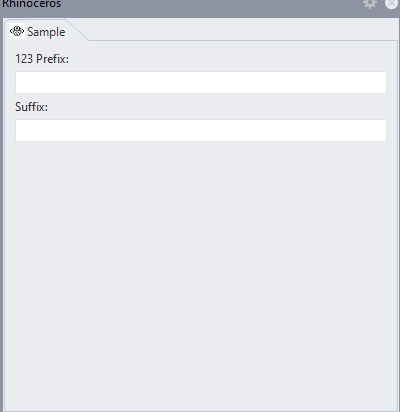 Is it normal that ETO panels couldn’t be updated with hot reloads?

To see the changes applied during a hot reload, the changed code needs to be run again. In this case, I guess, you need to create a new instance of the panel, or call some method that reloads the layout of the panel.

ahh I see. Thanks. I guess the panel needs to be reloaded using a method

Hi, I tried looking in Rhinocommons and I couldn’t find anything under Panels class to reload the Panel, neither could I create another instance of Panels.

Can someone help me with this?

below is the code:

One way is to set the Content property of a panel inside a method that you can call, rather than in the constructor. For example:

If you change the text of the label in your ide and hot reload, pressing the button will update the panel and show the new text without having to restart Rhino.

It doesn’t have to be a button in the panel, it could be called by any code that you can trigger easily. In your code you seem to show/hide the panel, so you could add this:

This will update the panel every time you re-open it while in debug mode, but this code will be omitted on release.

The problem remains that, when I change the Panel, like adding a new slider in the ETO form, I would like to test it out with Hot Reload.
I cannot make a SetContent method every time I add something new. it would be quite clumpsy.
Is it true? Not sure though.

and a slider will appear under the button, without having to re-open Rhino.

@Wiley you can also reload the panel by unchecking/checking its name in the Options list: