HELP! Been trying to model this for days now... Can someone help? Possible with Rhino or do I need T Splines?

How can one model this? Do I need T-Splines you think?

That shouldn’t be so hard in Rhino. It’s a slightly deflated sphere underneath, and three cylinders blended onto it. As the cylinders aren’t eaven, you should have enough cps from high enough degrees, so you can sculpt it a bit.
As the sphere isn’t a real sphere either, you could eyeball the shape of it and rotate a curve made from your assessments. Have you done a tutorial on blends? If not, do so. Also, the three chimneys are difering, handmade. So make it by hand;-) What is it? It’s a nice vase. Or curling bowl for the specially gifted?

Oh WOW thank you!!
Can you tell me the steps you used to get that??

Sure it’s possible. It gets more complicated, when the blends itself overlap, but that should be avoidable here.
Ah, Pascal’s shot from the hip;-)
As said, clay sculpting, fine tuning needs enough cps.

How do you clay sculpt in Rhino? I thought that was what T-Splines was for. What is cps?

I feel so stupid, but I can not seem to replicate your first VariableBlendSurface. 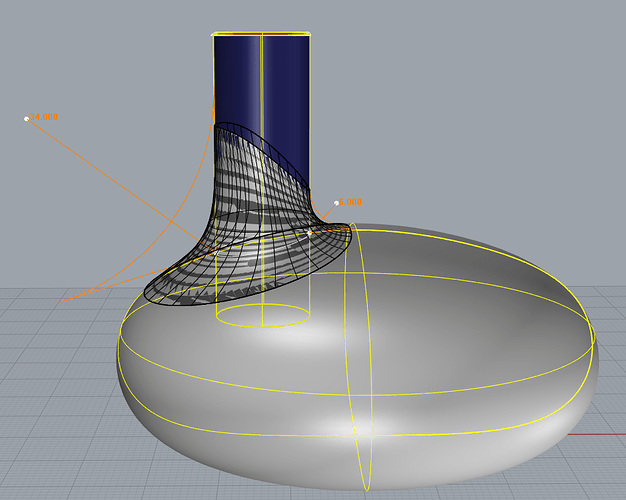 I GOT THAT! Thank you!
The rest seems very complicated. Do you think there is an easier way to get this shape?

What i did at the center you can do much earlier. Untrim one of the center blends to see how it was created. 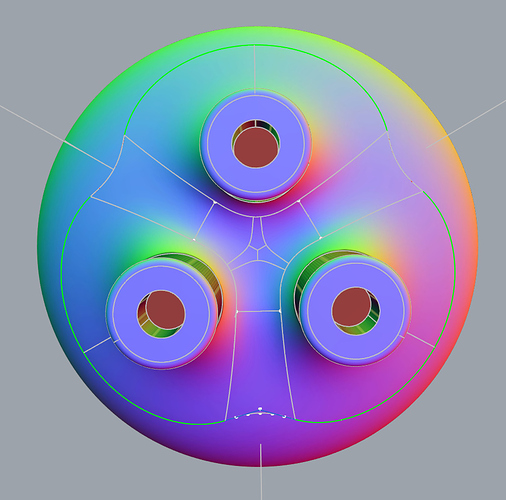 After your first Split, what piece did you polar array?

OK I DID ALL THAT SUCCESSFULLY! Now what is next after I trimmed the REVOLVED piece? 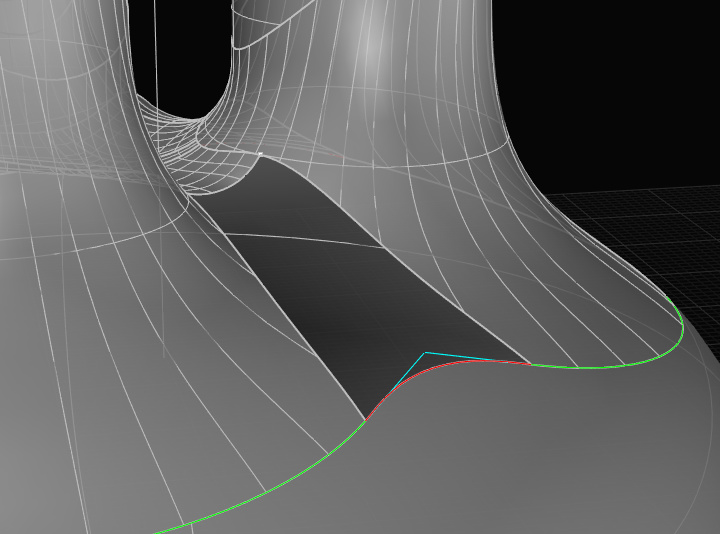 Next you create the cyan colored two lines in the picture above. Use _Line _Tangent from the green curve ends (the edges of the variable blend srf)

Once done, trim them at their intersection, so you have that corner shown in cyan. Next use _BlendSrf to fill the open gaps. All remaining faces where done with BlendSrf. When using that command, pay attention what it says in the commandline.
_
c.

Now I am confused by those two cyan lines. What are they for? Can’t that surface be created with those curves? I ended up using edgesrf. Is that ok?

I’ve thought you will find this out from my description in the previous post. If you use _BlendSrf to create the purple surface in below file, you have the option to rotate the handles for creating and adjusting the blend surface. The 2 cyan lines give you a point to snap to at their intersection if you rotate the blend handles with ALT.

The key is to create a blend surface which is tangent or curvature continuous. By default, _BlendSrf allows you to control tangency or curvature only along the blend rails. In order to match the start section of the blend surface to the trimmed edge of the revolved part (where the red curve blend is located), you will have to create an untrimmed surface. If you rotate the blend handles by snapping to the point marked in attached file, you can get closer to where the blend surface needs to be, so it does not change too much when you use _MatchSrf. Of course you can use _EdgeSrf too, but it will not be tangent to the surrounding surfaces and you would have to match it on 3 sides.

AWESOME I DID THAT!!! I had to recreate it in the dimmensions that i needed. I WANT TO SAY THANK YOU CLEMENT for taking your time to help me!!!
It is SOOOO much appreciated!! Now what is next? I have a 3 sided hole in the center…

@sh1tara, very nice ! To close the last bit, just use _BlendSrf again and pick 2 of the long naked edges as rails. There is also a possibility that you drag the end of the blend rail positions while the command is running and showing the preview. The single missing blend surface does not have to cover the full length, just a bit longer than the half length.

Then match the resulting blend surface at the short side to what you allready have and trim in Top view, so it looks like what is shown in Post #12.