Trying to create a workflow where I’d bake an object, rotate it in rhino, then reference it back in to gh.
Except every time I bake it, it doesn’t retain any knowledge of its initial orientation, making the gumball not so useful (I’d like it to be aligned to the [initial] object)

I know the plane the gumball is supposed to be oriented to, just no idea how to apply it to the baked object.
Any thoughts on if thats at all possible / ways forward?

Can’t you just rotate it in GH?

It doesn’t even seem possible to retain the gumball orientation between selection events in Rhino.

It doesn’t even seem possible to retain the gumball orientation between selection events in Rhino.

huh… weird…
grouped objects seem to forget gumball orientation between selection events…
but a curve or a box retained orientation no matter what…
this is with the gumball setting: “align to object”

Can’t you just rotate it in GH?

Some 180 objects, not all of which will ultimately be reoriented, but all independent of each other
Free rotation needs like 3 sliders at least? (Euler angles?)
And not as intuitive/easy to manipulate as rhino, in which the rotational plane is always in relation to the object
The reorientations are also not predetermined, so needs a lot of fiddling around seeing how it looks etc.

this is with the gumball setting: “align to object”

I see, but I don’t really care about the initial orientation, it just seems to chuck out my actual transformations every time I unselect. If that’s the way it’s supposed to work, then… okay… I guess. Is that align option shared amongst all gumballs everywhere? Weird. 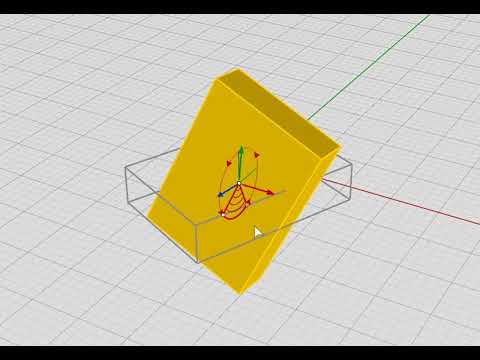 How about the orient component? Supply the original plane and the target plane. They can be the same if you don’t want to apply a rotation

Maybe this help you

I had to learn how works the gumball for another project, and took the opportunity to implement it in a gh component. A hand tool goes a bit against in a prog…