I modeled this small clamp a while back that I hope to eventually 3d print. I just got my printer and decided to work on the model again. Of course I’ve forgotten much of what I learned re Rhino. At any rate, I’m getting several problems.

First, shouldn’t a Boolean union remove many of the lines where objects have been joined? (See pic.) I have another copy of the clamp where this is the case.

Second, using filet on the edges gives poor results. (See pic.) Any idea on solving these?

First, shouldn’t a Boolean union remove many of the lines where objects have been joined?

That’s not part of the how the boolean operations were programmed to work in Rhino, no. Use MergeAllFaces to remove these edges.

As for the fillets, when they meet in sharp edges like in your case, they will tend to fail. If you first put a fillet on the vertical edges (in blue in the attached picture) (with a size that is larger than the one that you want on around the top edges), the top-edge fillet will be able to follow all the way around… 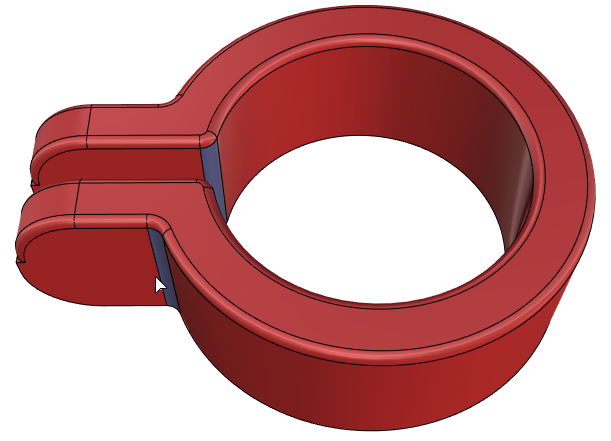 Thanks for the info. However, I’m still frustrated by this. Merge faces gives me extraneous lines that are not selectable. The FilletEdge still does not work and I get crazy results like voids and extensions beyond the object. I resized the item up x4 and tried different fillet radii, still no good.

Merge faces gives me extraneous lines that are not selectable.

As you see in that bottom picture, you have faces that have not been merged into -simple- planar surfaces and this will cause you problems.

Most of this stems from using (or abusing) boolean operations. This is a -very- simple shape and should be modeled by just drawing the outline in top view with simple lines and circles and making sure that they form closed curves without any problems when splitting and joining. Then extrude to the required depth. The fillets that are failing in your bottom picture will be part of the shape from start and and won’t have problems running a fillet around the top edges.

I agree it is quite simple. I would have thought using a Boolean to join 5 simple pieces was what it was intended for. In fact, I modeled the 5 pieces to get experience using the solid tools and Booleans which I’ve hardly used previously.

At any rate, after much trial and error I have a working model. I joined 3 pieces, cut in half then mirrored and joined again. Unfortunately, the good side held the nut and that was mirrored. I extruded to fill it, and now would like to know any methods to remove the outline that is left?

Upload the .3dm file with your geometry here and it will be easier to answer your questions. Use the vertical arrow above where you type posts.

[quote=“CalypsoArt, post:6, topic:46071”]
Unfortunately, the good side held the nut and that was mirrored. I extruded to fill it, and now would like to know any methods to remove the outline that is left?
[/quote]The face now has two trimmed surfaces, one the outer part which was trimmed to create a hole for the nut. The other is the extrusion face. You can’t merge surfaces across a trimmed edge. Instead delete the extrusion entirely, delete the recess for the nut if it is still there, Untrim the hexagonal hole in the outer surface, and make a new cylindrical hole.

Thank you. I was unaware of “Untrim”. I was able to rectify the problem using untrim, cap, etc. All checks say it is a good mesh with no errors.