From Stereo to Mono?

As far as we can tell, not very many users use this feature, much less even know it exists/existed.

With this argument you could easily drop many many good features.

I hope you don’t.

Hi Charles, I wasn’t saying that as a reason or an excuse… more just an observation on my part. I’ll see what I can do to resolve this for you… It turns out that a lot of this has to do with the improved display and its features…the stereo mode feature was just not cooperating well with the new design, which is why we made the decision to pull it (temporarily)… And the issues aren’t just hardware related, it’s the entire “stereo” mechanism in general… In order to get any kind of stereo effect, Rhino needs to render two frames, each from a different camera perspective, and then those results are merged into a single image (either by hardware or by software (i.e. anaglyph)… It’s the process of re-drawing the entire scene twice that needs to be looked at and reworked so that things work better in the new architecture. So we didn’t remove something that was working…quite the opposite…we removed it because it was not working and it was deemed that in order to get things working would have pushed schedules back further than we wanted. Sorry if I didn’t make that clear before.

We will get something working in 6.x in terms of stereo support, I just can’t tell you with any certainty when that will be.

Thank you Jeff for the explanation.

You say the anaglyph will come back.
I hope it won’t be a long wait…

In the meantime, a plugin will help.
It must not be super-fast, it is very clear that the rendering will take at least the double time.

Download and save the plugin somewhere appropriate on your hard driver, and install the plugin using the plugin manager…or whatever way you’re comfortable with.

Once installed, you will have a new Panel Tab choice of “Stereo View”…

Showing the “Stereo View” tab will reveal all of the anaglyph settings along with a list of views within your current layout… Simply CHECKing and UNCHECKing a specific view will enable and/or disable stereo mode for that respective view. 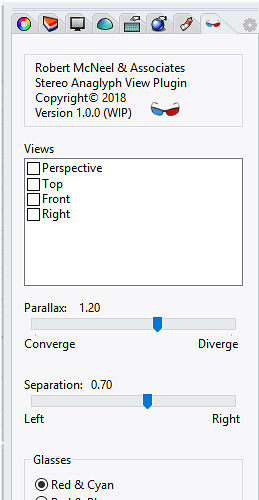 Settings are remembered across Rhino Sessions, and not saved per file.

Let me know if you have any questions, and of course what you don’t like (or like

See post further down for latest version of the plugin

Let me know if you run into any issues… Wouldn’t you know it, two minutes after I posted it, with tons of testing ahead of time, I found a bug…

Thanks again for feedback and testing.
-Jeff

Please use this latest version (1.0.1) … Just save it over the top of the existing one if you’ve already installed it.

Note: Make sure Rhino is NOT running when you do this.

But not completely:
The Parallax slider doesn’t do anything in here.
The initial setting was 3.3 (if my memory is correct).
The slider only changes the numbers, not the view.
So I don’t get a good image.

Hmm, now it works as expected.
Don’t know why… no problem.

I like the panel approach.
Far more comfy than set up in a display mode.

just out of curiosity, do you actually model in this mode or why do you need it? i painted myself 2 foils and tried it, it was of course not very satisfactory but it worked.

just out of curiosity, do you actually model in this mode or why do you need it?

No, modelling is not possible in stereo.
First some feedback elements are still mono. Second you will get some headache.

Stereo is quite useful to judge over designs.
Especially for folks that are not so very used to 3D CAD.

Second you will get some headache.

I certainly can attest to that!

Thanks for the plugin. I also find it a quite handy feature from time to time to check the 3d form of a design in more detail prior to 3d printing it.

Question, is it possible to get the plugin working also with the preview mode of Grasshopper somehow? When I tick the viewport in the plugin all Grasshopper elements disappear unfortunately.

I was unaware of the Grasshopper issue… I’ll take a look at it and post a new version if/when it’s fixed.

I just received my 3D glasses today for stereo viewing in Metashape of my 3D model of a construction site (built from drone photos). Really nice. Then I got to thinking about doing the same thing in Rhino 6 where I process the model. A quick search on the forum popped up this post and, following your directions, I now have it working in Rhino 6. The 3D stereo view really helps in understanding the details of this site. Without stereo, and even with the 3D model rotated around in perspective view, it takes a while to visualize all the levels of the site. But with stereo viewing, the details really pop.

I use a Python script I created for Rhino 6 to edit the model, make measurements (profile lines, 3D area, volume) and create maps (elevation, slope, contours).

The addition of stereo 3D viewing is a great option. I am sure a hardware based version would be even more impressive but I can understand that it is more complicated to implement well in Rhino 6. For now I can get by with this simple method and would be eager to try out a hardware-based version when it becomes available.

Jeff, thanks for getting this working in Rhino 6.

Will the plugin work with Rhino WIP v7?
Also, will stereoscopic imaging be included with Rhino v7 once it’s released?

In V7 Stereo is not there.
I used your plugin in V6, and it works good.
_MigratePlugins fails to take it over to V7.
Do you have an updated version of your Plugin?

The plugin you’re using should also work in V7. Just locate the .RHP file, start V7 and drag-n-drop the RHP file onto V7…it should install and work.

Let me know if it doesn’t.

_MigratePlugins fails to take it over to V7.

I would like to try and repeat this as it sounds like it is a bug in MigratePlugIns. Did the plug-in get listed as an available plug-in to migrate?

_MigratePlugins fails to take it over to V7.

I would like to try and repeat this as it sounds like it is a bug in MigratePlugIns. Did the plug-in get listed as an available plug-in to migrate?

Yes, it was listed.

Hmmm, that’s odd then… Did you get any specific error message for that plugin? If so, do you remember what it was?

Hmm, now it becomes difficult (for me).
This is V6: 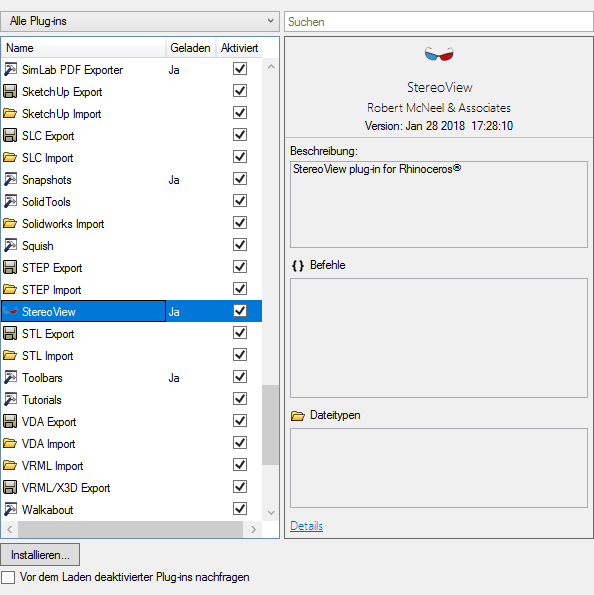 I don’t know since when it is gone.