I’ve got two questions regarding Dimensions in Rhino. Is it possible to have a flexible precision. I have mostly numbers without any decimals (like 314), sometimes I’ve got one decimal though, mostly 5 (like 314.5). I don’t want to see the 0 as a decimal though (314.0), but if I have a 5 after the comma, I would like to see it. Any suggestions?

The other question is about fixed extension lines, I saw a topic, which was 5 years old. http://v5.rhino3d.com/forum/topics/dimension-style-architecutal
it wasn’t possible then, is it now?
Thanks.

It is in the WIP for RH6. You can download that and test the functionality there.

Hi Paul, As @wim mentioned the v6 WIP (Serengeti link at the top of this forum) has an option to suppress trailing zeros which I think addresses your first question. The second one from the older forum post I believe is possible with the use of the extension line extension and offset options. I might be misunderstanding that one though because I can get the same result in v5. 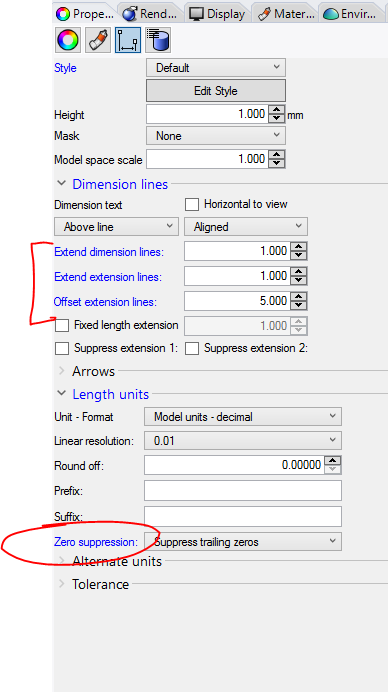 Thank you. One reason more to switch to V6. I’ve always been afraid because it’s still a WIP, but I will do so now

Oh I’ve been waiting for this since …

Hi I made a screenshot that illustrates my problem: What I need is a Extension line extension which has on both sides (of the main line) the same le…

Is that available in the Mac WIP too?

No.
The Mac WIP is using the V5 codebase.
After V6 for Windows is released, then the next big project is moving Mac development over to the V6 codebase. Then these tools will start showing up there too.