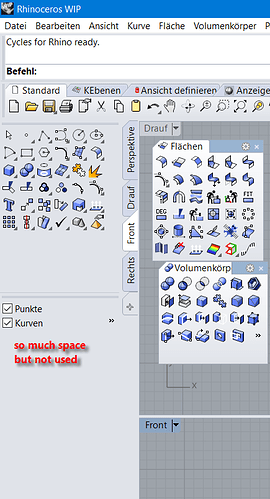 This is a docked filter box.
It doesn’t know it’s size, and then shows a chevron for the not yet visible options.

The effect is seen right after starting Rhino.
On maximize window/normal state toggle this happens:

Also notice the appearance of the toolbar on normal state!

Hi Charles - thanks, I see this, at least partly… 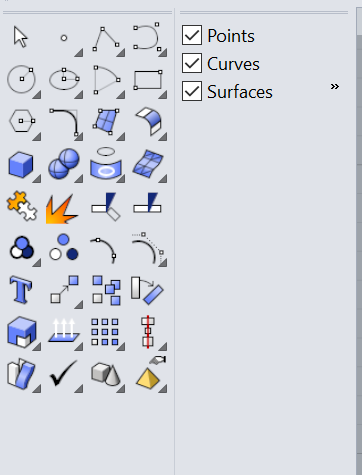 BTW, I’ve found that docking Filters to the left of the command line it pretty efficient in terms of screen real-estate, since the command area is generally wider than is really useful.

BTW, I’ve found that docking Filters to the left of the command line it pretty efficient in terms of screen real-estate, since the command area is generally wider than is really useful.

how do you do that?
In here, I can’t dock anything left to the command area.

I may not access this:
https://mcneel.myjetbrains.com/youtrack/issue/RH-39570
Any special reason?

HI Charles - I changed the bug item so that you can see it now, I hope. As for docking… if toolbar locking is not on, it should just work - float Filters and OSnaps, and then drag them up against the left or right edges of the Rhino window at one end or the other of the command area - drop when you see the blue preview rectangle show up in the right place.

yes, I have it docked.
I had to undock it first, then redock.
I tried to move it from docked state to docked state, which is expected to work, but doesn’t.
Ok, not a big deal.

The docked filters are pretty useless this way.
An idea is to have the filters as a menu in the Osnap box.
Then they are where they belong to, and they are always visible and accessible.

And look what happens on maximize/normal state:

Hi Charles - I have a request in to fix this problem, which bugs me as well - I think this is what you mean, right?
https://mcneel.myjetbrains.com/youtrack/issue/RH-37209