Files changing when I close and reopen them!

I’ve been using Rhino 5 for 2 years but I have no practical training, so I guess that I’m a noob.

I’m a marine fabricator and I create parts by importing DXF data, which was captured by either a laser or some sort of photogrammetry. Once I have that data, I do a series of offsets on it in order to create to parts that I need with seam allowances and such.

Lately I’ve noticed that although my parts are all being made perfect, when I close the file at the end of the day and reopen it the next day, my model is changing, curves and lines are moving.

So my employees are spending days assembling the stuff, only to find that now it doesn’t fit. Any ideas as to why this happens?

What are you comparing the opened .3dm files to? The model in the open .3dm file is different than what?

The changes are actually quite obvious. When I create the file, two curves will intersect… The following day, I’ll go to trim something, and on files that are closed and reopened the following day, the trim command fails every time.

When I zoom in, the lines are no longer intersecting, and when I look at the other end of the model, the line is now sticking out… indicating to me that it has shifted. I hope that makes sense.

Are you saving as a 3DM and exporting to DXF or are you only saving DXF files?

I’m saving as DXF because I send the files to a cutting machine afterwards, and that’s what it reads. I was originally getting some crazy distortions a few months back, and the McNeel guys told me that it was because I was making my offsets from… maybe nurbs curves? So they had me first convert my raw data, and that solved my issues.

So… on larger files that I can’t finish in a day, this keeps happening. As an example… I’ll make a square and then draw a bisecting line. The next day, I’ll go to split it and it won’t split. When I zoom in, I see that my bisecting line as moved up a fraction… Creating a “stick out” on the top, and a broken intersect on the bottom.

Don’t think DXF files have the resolution 3dm files have so when you save you’re losing accuracy. Best to save as 3dm then export, also are you working a long way from the origin?

That makes a lot of sense. Can you clarify your origin question?

Well that makes a lot of sense, and I do understand a good portion of it, but a lot of the terminology is simply Greek to me, and I just don’t fully understand it.

I bought 3 copies of Rhino and have performed wonders with it, but I simply don’t understand the terminology, nor have I found a layman’s version of it anywhere. I really hate to keep calling McNeel, because I’ve done so well on my own, but I guess that’s my only option.

@jim5 - There are a couple of things I can think of that might have some bearing on this, or maybe not. But they might help you figure it out.

Now this makes a lot of sense… I can use your top tip to help save time, because I’ve always extended these minute gaps before trimming… As for the simplify lines and arcs, that could be my issue… When I import my data and convert it, it asks if I want to simplify and I say no… but am I doing it somewhere else?

but am I doing it somewhere else?

In the Acad export schemes, on the curve page, there is a section about how to treat curves when they are written to acad files. 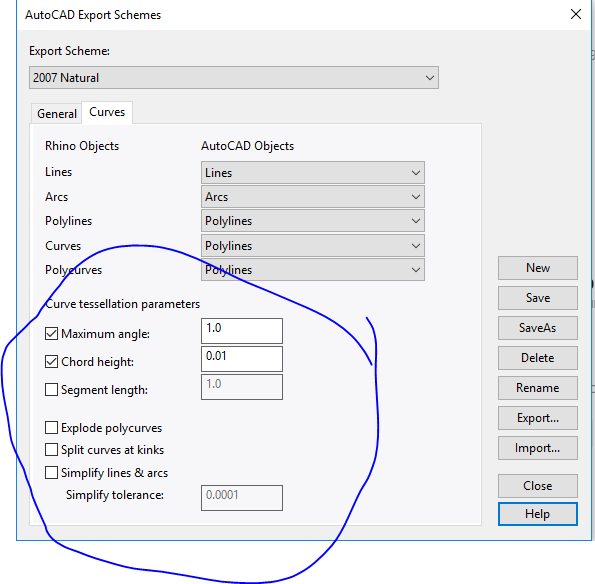 Okay, so to clarify with regard to ORIGIN and my distance from it, are we talking about how far away that I’m physically working on the parts of my model, from the point on the field that I imported the raw data?

For example, I shoot a boat hull with a laser, import the data on to my screen, copy it to preserve the original, drag the copy across the screen, and then begin offsetting and modifying it.

That seems to be one issue… And the other is saving my files as a .3dm and then exporting them as a DXF if I understand correctly.

I’m very active in two other technical forums, but they’re on things that I’m fluent with, so I apologize at the noob questions and answers, but I sincerely appreciate all of your help. I don’t see any means to upload files here or I’d put up an example of my issue.

So… When I save, I save as DXF, and my options are R12 Natural. I just checked, and simplify lines and arcs was checked, with a tolerance of .05… That sounds like it could’ve been my issue, but I’m checking the lines that have moved and the seem to be off by .14

Can you save out a few lines\curves to a 3dm file and a DXF and attach so we can see what you’re working with.

My thoughts on DXF might be wrong for Rhino. I’ve worked with CAD\CAM for years and DXF has always been a problem. AutoCAD default is to save to 6 decimal places, it can be increased to 16 but a lot of programs seem to use 6. Looking at a Rhino generated DXF it looks like they might be to 16 places so accuracy should not be a problem, simplifying may introduce problems though.

I don’t see any means to upload files here or I’d put up an example of my issue.

Use this icon at the top of the discourse edit window:

I’m working on that one now… Any hints on where that is?

Thanks a lot… It has been an uphill battle because no one else its doing what we’re doing, so I’ve had to figure out each aspect by myself, and then integrate the processes together. It works, but sometimes there’s a bit more prayer involved than I’d like. I’m trying to figure out how to upload files now.

Okay, so to clarify with regard to ORIGIN and my distance from it, are we talking about how far away that I’m physically working on the parts of my model, from the point on the field that I imported the raw data?

The “origin” is at 0, 0, 0 in the Rhino coordinate system. The distance from the origin is the distance from that point to the object in the units used in Rhino. The size of the numbers is important because problems start to occur when the numerical distance is very large, such as 1,000,000 or more.

For example, I shoot a boat hull with a laser, import the data on to my screen, copy it to preserve the original, drag the copy across the screen, and then begin offsetting and modifying it.

An alternative to dragging a copy across the screen would be to create a copy on a different layer. Then you can lock and/or turn off the layer with the original to preserve it and work on the copy.