Extruding from a domed surface

I’ve hit another stumbling block that I need some help with please. how do I go about cutting a hole the same diameter as the blue extrusion, through the domed red surface, but perpendicular to that same surface? I’m trying to form the vent opening as per the photo.

Note that the central axis of the blue extrusion is in the right location.Query.3dm (2.8 MB)

Where you have the blue cylinder draw a curve from the centre so that it bisects the red surface. Use the intersect command and select the curve and red surface.

This will create a point where the two intersect. Use the line surface normal command to draw a line perpendicular to the red face and then just use the pipe command to create the cylinder. 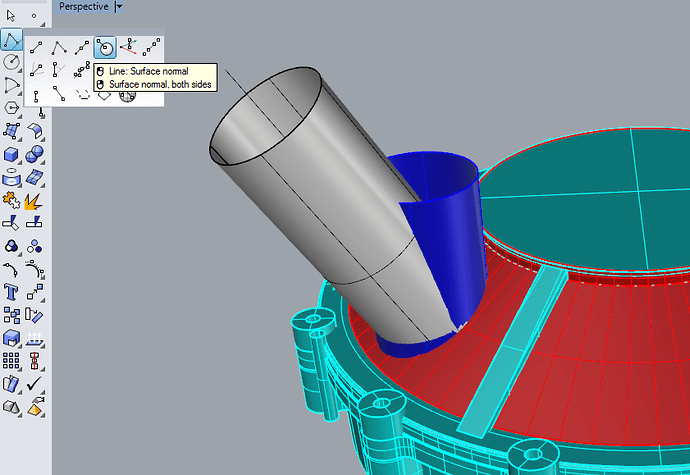 I wasn’t even aware that there were drop down boxes! I’ll start exploring those as I have probably been doing some things in a long winded, roundabout way.

For the sake of varieity, here’s a slightly different way using a CPlane, assuming the center axis of the cylinder hits the red surface at the desired circle center:

Male a point at the Cen of one end of the cylinder.Project the point to the red surface in Right. The result is the center of your new circle.
CPlane > Surface on the red surface, snapping the new origin to the point. defaults for the rest.
You could also make a line between the ends of the cylinder and intersect it with the red to locate the center.
Circle, center at 0,0,0, radius 31.5
ExtrudeCrv to make the cutter. You could also Trim directly with the circle.