I am trying to get Cumulative Sum of multiple values (n) by using GH-Python as we do in excel, which results in a list of (n) values. But unfortunately, it is just calculating the sum of two consecutive values.

Can anyone help me with through this? I have attached both the excel screenshot and GH-Python Files. 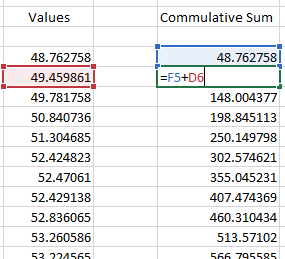 You are only ever adding two consecutive values from the same list in your Python code. You should instead do as you do with your spreadsheet: take the first value from the running total, the second value from the input list. Here an improved version of your script:

A better approach is to just use a running total though. That takes a way the need of fiddling around with indices into two separate lists, and it is less code.

Thanks a lot @nathanletwory for your guidance, It worked !