How can I divide a rectangle, representing piano keys to be sawn from a panel? The panel has a short (Y axis) front section ,equally divided for the natural keys, then a second section the narrow portion of keys visible to the player, not an equal divison of the keys in each octave, repeated in sequence across the range of the keyboard. The final quarter portion of length (Y axis) is a section divided equally (x axis) by the number of notes in the keyboard. What I call here the second section and final quarter portion are then joined by lines, not necessarily parallel, and the drawing is complete. Easy on paper, but nothing stands out from the Rhino keyboard shortcuts I have been advised to consult. Please advise, many thanks!
Paul McNulty

I should have written ‘specifying equal, or a repeated varying sequence’

I should even better have written ‘specifying equal, or a repeated sequence of varying widths’

it sounds like something which you should draw by hand if its not an infinite amount of keys which you want to display. array may help you to get the numbers of octaves and the rest you adjust manually for example… if you want it more dynamically grasshopper could help you set up an algorithm for displaying a variety of keys.

to be sure knowing what you are talking about you could upload an image of your drawn piece of paper if you have that already. that might help figure what you actually want.

here i set the array to 50 as an instance and gave it a specific spacing, you can simply draw a line for the shape of the keys to be different and trim the rest off.

for a varying spacing you have to use grasshopper but then again maybe just do it manually if its only for one layout.

another idea would be to use make 2d in perspective or parallel view with a camera set above it for example. or simply just rotate the lines after you are done and make it from top view. thats how you could get the keys to be varying in distance. but only limited of course becoming smaller.

and then you could also create a wildly bent surface and use FlowAlongSrf and use make 2d to get it flattened or project to cplane. or use twist… there are sure some tricks if you know where you want to go.

The variety within each octave is fixed, repeating as necessary. What I
want is to have panels printed with the lines before sawing, rather than
spend a disciplined hour on each panel drawing manually. I know a colleague
who does just this with rhino, but he is being coy.You used the word
’array’, and I’m gonna look to see what it does. I have very poor
comprehension thus far for rhino, but it can’t be impossible.

Richard Z, thanks mightily! ‘Array’ is the word, and it does everything but
calculate even divisions - the intervals must be specified. Fair enough - I
have a handle on it, now. Good news in Bohemia

Richard Z, here is a keyboard, showing better than my description the
different sections in the layout of the panel. Thanks for your help. P 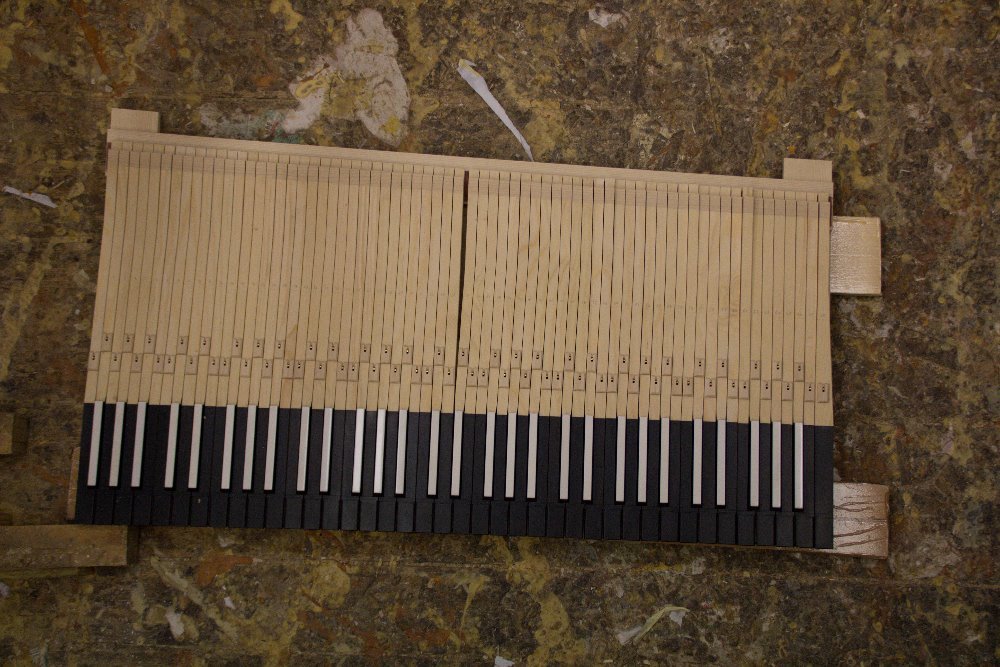 looks interesting, keep us updated if you want

seems the only way to learn this program is to crash through it learning a
code of strange protocol that will in 147 years become second nature. Ouch,
no need to worry - everybody learns Rhino, and so say all of us.