Door Insert between close parallel walls, into blocks from non-blocks

If two walls are parallel and very close together, what controls which wall a door is inserted into?
In the below case, the door has been removed from the block (where it was in the bottom wall) and widened. The block recognizes its presence but shows the former width. Outside the block the door is inserted into the middle wall, which is outside the block and recognizes its new width. If the wall in the block doesn’t recognize the door, why does it have a void at all? If it does, why doesn’t it’s void reflect the door’s width? (The door is considerably offset, btw) 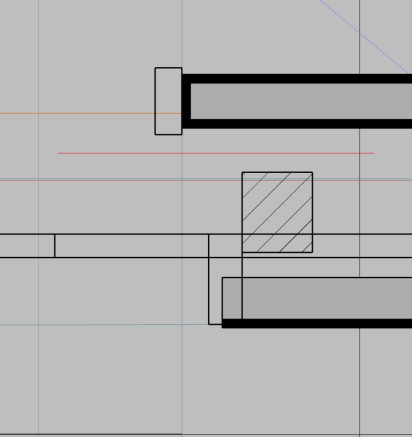 If two walls are parallel and very close together, what controls which wall a door is inserted into?

Doors and windows will always attach to the nearest wall, computing the distance between the door insert point and wall center surface.

Regarding your issue, objects in different blocks will never interact, so place all of them in the same block or directly in the model space.

There’s no door in the lowermost wall, which is in a block (everything else isn’t). But that wall still has the void it had before the door was removed from the block…
(I see the work around for me is to put an opening in the block-residing wall, but still there is something going on which I don’t understand.)

Actually that work-around won’t work.
There’s some object there, and this is what happens. With all layers on, no objects hidden, and no object visible where there is this void. (the block is now isolated in the video). The objects behave as thought there’s a hidden opening affecting both flanking walls. After opening the block a few times this void from the removed doors deleted itself. I stil don’t know what was going on. (I exported the block to post, but the mysterious void did not export with it.

Now the issue is present only when the block is being edited. Turns out it is an object in the project, but the object isn’t in the block. The video below illustrates the issue. Below that is the exported objects, which behave the same way shown in the video:

Sorry for the accumulation of posts, but I don’t know how to control what I’m doing here. In the below video, the doors in the middle wall are creating an opening in the wall beside them. This prevents me from putting the smaller opening I need into that wall. That small opening only works if I delete the middle wall and its doors, but I need them too.
COntrolling DOor Insert.3dm (1.8 MB)

I see the problem. When I edit the block, the wall creates an opening for the doors outside the block. I’ll report this. As it is only happening while the block is being edited, I guess you can continue working in your project while this is fixed; anyway, I’ll keep you updated about this.

We have been looking at this issue. Rhino “BlockEdit” command works by copying the geometry inside the block into the model space, so during the block edit, walls of the block will interfere with doors in the model space. There is nothing we can do to avoid this. But when you terminate editing the block and press “OK”, the wall will be moved back to the block, and the opening is no longer done.

If you want to edit the block without having its geometry interfering with the rest of the geometry, a possible workaround might be copying the block instance to a different place of the drawing where there is not any other geometry, edit the block there and delete this second instance afterwards.