Doe's someone using V-Ray and NVlink?

I don’t get the expected result, the VRAM isn’t used like expected and I spent to much time yet. And so I ask me, doe’s someone using NVlink and V-Ray and get more than 11GB used?

For example I can render a scene at 10GB VRAM at 2x2080ti and 1x1080ti. If I would add some more details to the scene and disable the use of the 1080ti than V-Ray stops because not enough VRAM is available.

Any ideas how I could get it working? 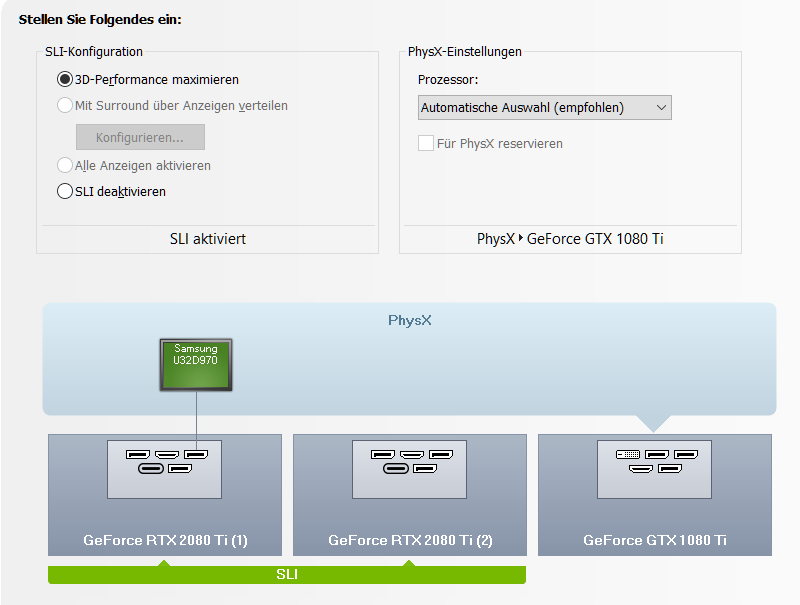 Hi Micha, is the idea here that with NVlink you can double up the ram? I never heard of any GPU render engine taking advantage of such a thing. Is this common?

This was written on their blog article:

Important note: It seems like the regular GPU memory reporting API provided by NVIDIA currently (at the time of this writing) does not work correctly in SLI mode. This means that programs like GPUz, MSI Afterburner, nvidia - smi , etc. might not show accurate memory usage for each GPU. Knowing this, we have modified the memory statistics shown in the V-Ray frame buffer so you can track actual GPU memory usage there. We expect NVIDIA will correct these reporting issues in the future.

Hi Micha, is the idea here that with NVlink you can double up the ram? I never heard of any GPU render engine taking advantage of such a thing. Is this common?

So far I know, V-Ray is the first engine which support this.

I use the recommended Nvidia tool. Here some more infos:
https://forums.chaosgroup.com/forum/v-ray-for-rhino-forums/v-ray-for-rhino-general/1037813-gpu-memory-usage-shown-at-the-frame-buffer

But at the moment I get the same VRAM usage only like at my 1080ti, boths cards with identical values.