I was wondering, though, if anybody else is having problems with the display of points - or if this is an exotic system-dependent issue.

When points or curves are on a layer that is black, the points are OK. Any other color and the points / control points are white only. On a default background that is white, this becomes impossible to work with rather quickly.

In the attached pictures there are point objects on a black and brown layer and one curve on the black and one on the brown layer. I have changed the style from solid square to round with white center but that doesn’t do anything in helping fix the problem. 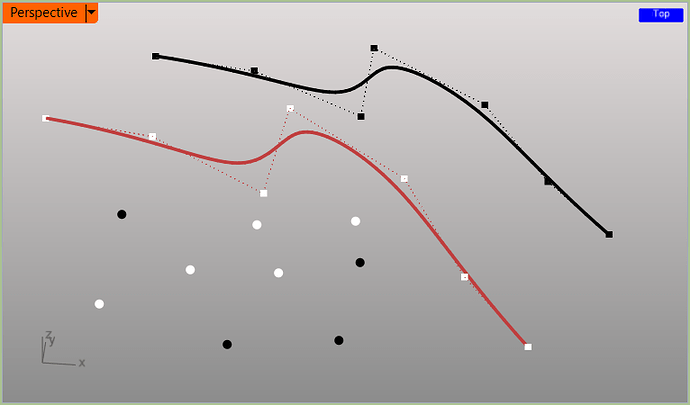 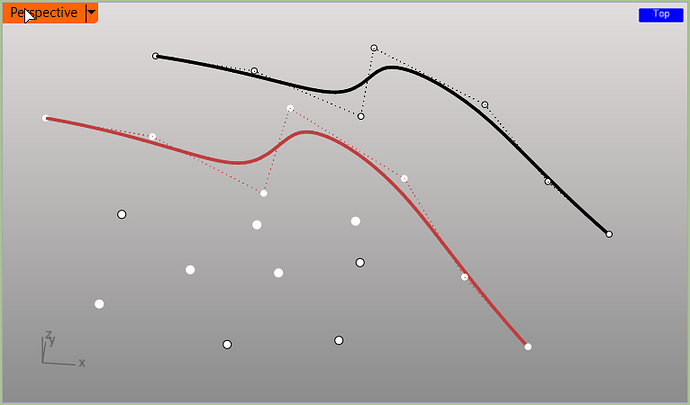 Points and control points display default to the color of the layer for me.

Well, at this point I cannot even reliably reproduce the black layer behavior.

That is, when I select a curve on a black layer, sometimes the points will have a black outline (like they should) while other times they will be completely white.

What are your point / control point settings in a typical display mode?
To compare, my Wireframe view mode is almost default out-of-the-box:

Pasted image873×227 13.2 KB
Yet, when I extract the points of a curve, they now appear correct but when I then select them they turn white and disappear against the background.

There are other oddities going on with the display as well and have been going on for ‘ever’. In the attached screen dump, for example, I drew two curves, extracted the points, selected all – notice the command line saying 12 points, 2 curves added to selection. – and then hit Esc to deselect all. The top view is the active one and that is repainted to show all unselected (well - the points being completely white are not seen). The other views do not repaint.

Thanks Wim, I filed https://mcneel.myjetbrains.com/youtrack/issue/RH-35575 I see the Red layer issue in your file but not a new file I make here. The strangest thing is that Purple layers are the ones that make points white here… not sure why and Steve will have to take a look.

There are other oddities going on with the display as well

I can’t reproduce this one here so my hunch is that it’s GPU specific if you can also reproduce it with Wireframe in default. I know there’s still a lot of active display work happening in the WIP but can you provide all your SystemInfo (using that command) and a file where you select all and esc to show the views not refreshing? Feel free to email it all in to tech@mcneel.com and I’ll file it.

I see the Red layer issue in your file but not a new file I make here.

Interesting. I suppose that makes this issue template-specific and that’s why I’m seeing this in all files.

a file where you select all and esc to show the views not refreshing?

It was doing that in the file I posted above but it’s not reproducible at will. It happens all the time but not when I want it to…

FWIW, I’ve also been seeing this on another laptop with another NVIDIA GPU and other drivers under RH5…

OK. I get that one now. I was getting frustrated with working in a file and thought that I could just use a factory-default template. I copied my curves over to that new file and now see that curves that are put on the default purple layer makes white points.