I have got my first Python script to work, hurray! But I had to store the file in a location different from the default location which popped up when typing the command RunPythonScript, since that location is hidden when trying to save my .py file. And changing the path with each trial run of my script gets a bit annoying after a while (and as a raw beginner I needed many trial runs…). To my knowledge there is no script editor available yet in Wenatchee for Mac, so I did use a plain old text editor.
I know there is a way to make hidden directories visible by using the console, but I would like to stay away from that (statements like “killall” make me nervous, visions of reformatted harddisks…).

Is there a way to change the default path, or “force-feed” the script file to the default location?

( btw, I am not using the command entry field in Rhino) 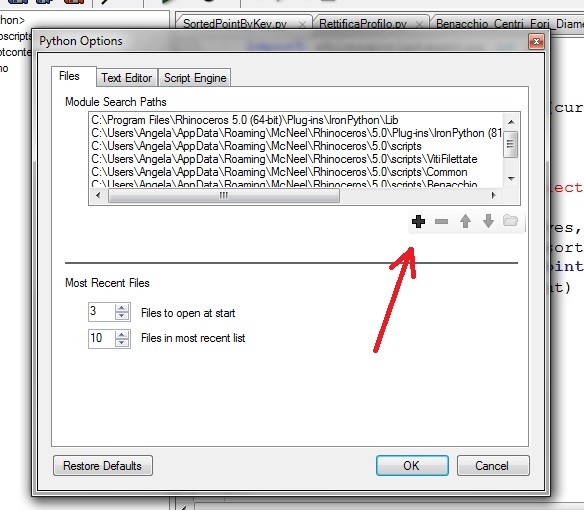 Thank you, but alas, no Python editor in Wenatchee for Mac, as I wrote in my post.

I did find a solution by coincidence. I downloaded the free software “Textwrangler” from the Appstore, and as a bonus it contains a menu point “open scripts” which provides access to its own scripts folder, but also allows file manipulation to the other folders of the “Library” tree, including the Rhino scripts folder.
Also, the file>open menu has an option to show hidden folders, so I am set all the way…

I simply put an alias (shortcut) on my desktop and then use that to store and access my scripts. But I agree that the default location is really bad - almost worse than Windows, where it is also hidden - and that the user should have some control over where they can put their scripts. I assume that once the script editor for Mac is available, some options in this direction will come with it.

Personally, all my script stuff is stored in Dropbox, that way my scripts are always available and up to date on all my computers.

what Vittorio showed works only as search path for Python Script Editor.
On invoking RunPythonScript, Rhino always seeks C:\users\login\appdata\roaming…
If you want to store your scripts elsewhere, eg. on dropbox folder to have access to them form anywhere, the solution is to use Microsoft’s “symbolic link” (Win 7 or higher):

which can be made by typing in cmd window:

(In Win 8 cmd must be run as administrator)
From now on, Rhino still seeks the scripts in LongAndOftenHiddenTooHardToRememberDirectory, but finds them in your favourite location.