Ever since I installed vray 3.0 , in rhino render , decal doesn t work for me. using Rhino V5

It works on my desktop but not on my laptop

Please post a screenshot from Options > View > OpenGL from the system that doesn’t work.
I suspect you don’t have a properly configured driver or maybe even an unsupported adapter on the laptop.

Hi John,
it s ok, i managed to make it work somehow. I find decals to be a little ‘’ special ‘’ to play with.

Do normals of asurface need to point outwards for decals to work?
It worked with flipped normals outwards. Never had this issue before. Don t think it has to do with conflicts with other plugins either.
I also restarted RHino V5 ( SR 14 ) and reopened the file and it worked also. Weird…

Thanks for your help

Assuming you’re using the default Rendered display mode, then decals in V5 will be visible from both sides of a surface and the surface normal direction does not matter.

If you have modified your Rendered working display mode backface settings like this: 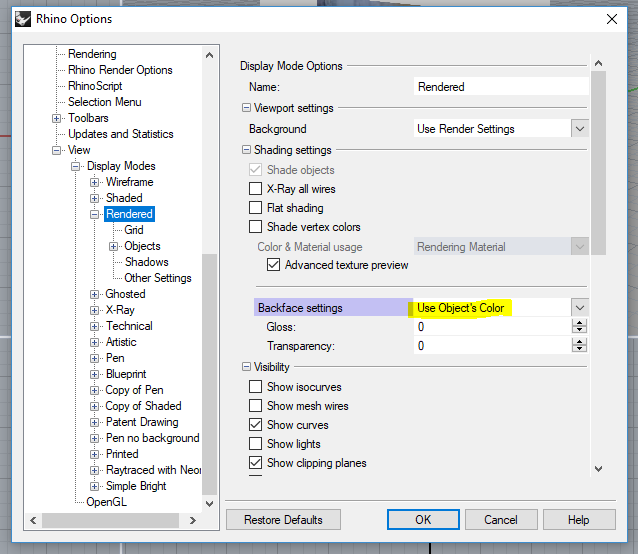 then Rhino will only display the decal on the front side of the surface. Then the normal direction does matter.