I was wandering if this will be possible in GH2? It would be nice to have cusers and userobjects that already have colors predefined…

There will probably be an equivalent to the custom preview component in GH2, but it will also be possible to assign meta data to values which override preview properties such as colour, point symbol, wire thickness etc. So you’ll be able to achieve custom previews without having your shapes be in specific components designed for just that.

Nice to hear that @DavidRutten, any alpha release of GH2 coming soon?

Screencap of assigning meta-data to points, overriding both the colour, size and symbol type. 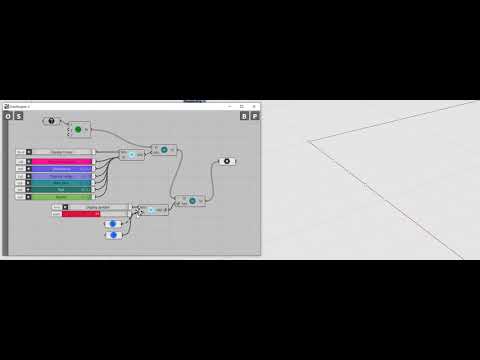 The interface looks very nice! It’s almost a pity that it is constrained to work with Rhino only.
It would be cool if GH2 could run as a stand-alone application.

With the functions that are not related to geometry from Maths and Sets, maybe a few more added. Then additional components could be programmed by others using the Python, C and VB components. Like this, I imagine, that GH2 (stand alone) could also make use of other common packages (such as numPy, tkinter… ) So it becomes a general visual programming language interface to be used for everything.

Hey David, are you happy with the capsule style? I find it strange that it has the same color as the background, and it looks very flat to me at a quick glance but if you look at the detail this clashes with the relief or the slightly three-dimensional effect of the capsule. In my opinion it’s halfway to somewhere. It gives me a feeling of excessive homogeneity that seems to require more work to the brain to memorize the different parts of the definition because it all seems too similar.

Aside from this unsolicited feedback, it looks cool and this feature looks great. It will have support for materials, won’t it? As an object (a class that inherits an interface or something like) or as key-value text pairs?

[…] are you happy with the capsule style?

Meh, still tweaking. Most of the icons are still auto-generated so few components look like they eventually ought to. All the aspects of the capsules and background (colour, slab thickness, corner radii) are skinnable now as well, so you’re not limited to my personal aesthetics.

I imagine there’ll be lots of feedback during the early beta phase where a lot of aspects will get changed in response to feedback.

I wanted to make it possible to switch between predefined skins very easily btw. so you can have light/ dark modes of you want.

It would be cool if GH2 could run as a stand-alone application.

I see a lot of potential in this for producing and editing social-media content, audio-video, also text analysis and open formats phrasing (rapid prototyping of software in general). But for this gh needs Pyton 2.x, 3.x integration…