I’m looking to create a cylinder with a split, where I can edit the edges of the split.

In my attempt 1, I tried lofting 3pt arcs together, but I noticed it would alter the cylinders sides. The loft would create warping.

In attempt 2, I tried “trimming” the cylinder. The problem with this method is the original edge of the cylinder was preventing it from being recognized as one surface.

To clarify, my goal is to create a gash in the cylinder without disrupting it’s shape (except for the gash).
And my end goal is to have the gash only go halfway up the cylinder.

Would anyone be able to point me in the right direction? Any suggestion would be great! Would love to learn. 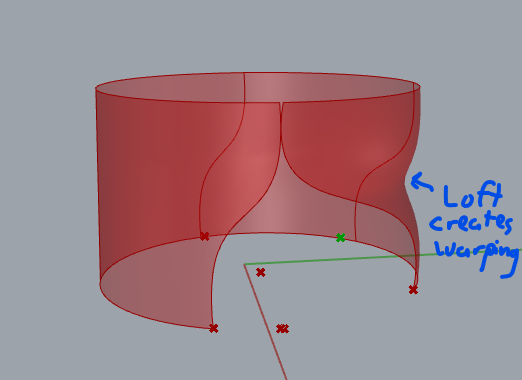 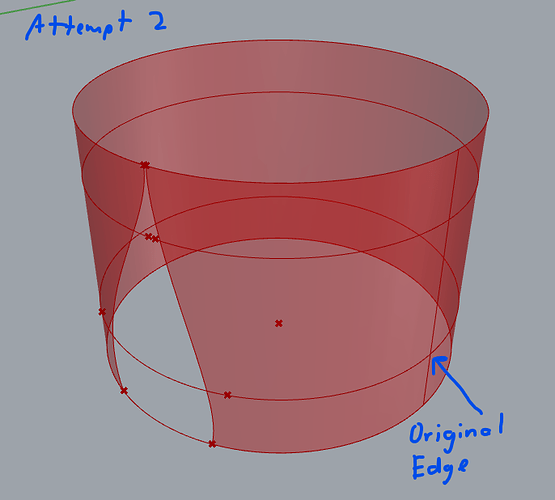 In regular Rhino you could use SrfSeam to move the seam to between the curves. I don’t use Grasshopper so I don’t know how to do it in Grasshopper.

Noted thanks, though I’m looking to adjust it in grasshopper since I need to flexibility.

GH has a Seam component, though I didn’t use it.

I took some hasty shortcuts using List Item and sometimes grab the wrong thing… that can be fixed. (not done below)

The cyan and yellow groups get “the right things” (projected curve and surface), though it’s possible to set the Graph Mapper in a way where the projected curve doesn’t touch the bottom of the cylinder, which gives a weird and unwanted result.

Thanks Joseph! I will decipher this script. Thanks for the added explanation too.

I used the cylinder’s seam in a weird way to create the interpolated curve (one edge of the “gash”) but it doesn’t have to be that way. As long as the opening doesn’t split the surface, it really doesn’t matter where the seam is located. The interpolated curve is mirrored and projected to make the edge of the opening but that can be done in many other ways including hand drawn, without regard for the seam.

P.S. An example to show the shape and location of the opening relative to the seam is arbitrary.