Hi,
I have been working very basic stuff with Rhino 5 and would like to go into more advanced work like importing mesh and render.
I have imported few mesh into my project and the computer slowed radically down (and I haven´t even started rendering).
When I do simple command the CPU go up to 100%. It is AMD RYZEN 7 1700 eight-core processor. What CPU would you recommend for working with small interior design projects. In the store they have 3700 and than 3900 is a bit expensive but I am not sure 3700 will be enough.
Thanks

I am curious on how fine the meshes are, and how much memory you have in your machine. Some meshes can be quite fine with millions of triangles, and use up lots of memory. If your computer runs out of memory, it will use virtual memory, which is much slower. You might look a the Windows task manager to see how much memory is being used.

Perhaps also, that your meshes can be remeshed with fewer triangles/quads.

It seems reasonable that almost any command will make the CPU go to 100% on at least one core for a brief time, because the CPU (Processor) will do what you want as fast as it can. Usually we don’t notice this, and it cannot be seen in the task manager because the time is too short.

I have a AMD 3900x. Render is never fast, but it will handle most things that can be thrown at it, but I also considered the 8-Core 3800x. The 3700x is cheaper still, with slightly lower clock speeds.

Memory and motherboard price is why I went with the 3900x, because they are half of the total price.
[I reused my old rackmount case and GTX video card. I spent around in USD, $490 for the CPU, $330 for the motherboard , and $150 for memory. I also replaced the power supply because the other one was too old. It had all better last for 5 years. LOL! ]

Though, until you render/raytrace, CPUs with fewer cores are almost as fast. While not rendering, some quad cores are slightly faster than many 8-core processors, but that seems to be changing.

Then again, it may not make sense to get a new quadcore for design, when it’s likely that others thing you do will likely use more cores anyway. You may render an image, then put it into Photoshop or a video.

Hello - how big is the mesh?

Hi, thanks for your reply and tips
It is a small space I am drawing and I don´t have many meshes but added details in like flowers,cutlery lights etch. It came very slow with adding these few objects. Probably I should look into if I can simplifying by remeshing before investing in larger CPU.
I am using 57% of the memory. The drawing is 3429 MB and I have 6500 MB available physical memory. 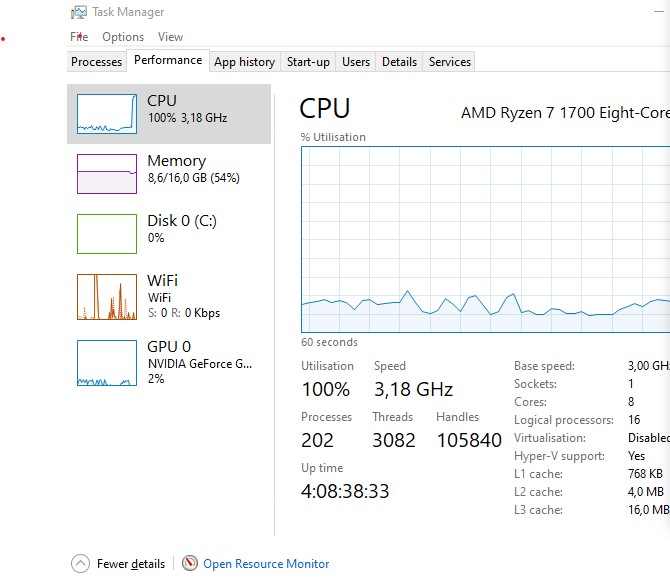 Hi Pascal
I am using about 3500MB and have 6500MB available? And it is a small model, with few accessories and very few furniture and cushions. Do you think it is a large mesh for a small project?
Best

The same thing that causes the memory consumption, may slow your computer. You might reduce some of the meshes, and see if they look good. There may be some facility for remeshing in Rhino 3D.

For Re-meshing, there is also Meshlab, which is free:
http://www.meshlab.net/

Windows default CPU monitor groups all the cores together. Single-core processes may not show as being at 100% use.

You can change the readings by right-clicking on the CPU graph, and choose logical processors. 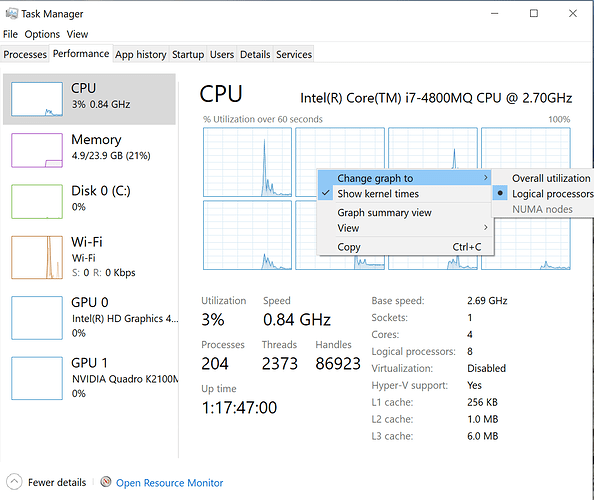