Agree on 1. Your video makes a great case. But this should only work along edges, right? Splitting between edges and re-creating faces on either side of the split that could be triangles or ngons seems like it might be messy.

Agree on 3. _Copy and _CopyToClipboard should work on all subobjects: mesh, SubD, Nurbs. It’s intuitively what a user expects subobject manipulation to allow. If a program lets me grab an edge and move it, altering an object, I expect to be able to copy the edge and paste it in place, or copy it and paste one or more copies elsewhere. It shouldn’t replace things like _ExtractSrf _DupEdge and _DupBorder, but it should return the same results in the same context of use.

But again: _Copy already works. @gustojunk I have _Copy set to control-alt-C on my keyboard options, I use it all the time. And for finding workaround for things that aren’t done yet in the Work In Progress Rhino 7 because it’s a work in progress, it’s been very handy, many times, I’ve been using it for months. _Mirror is handy this way too. It also produces a new SubD from subobjects.

RE: 1 (split edges): yes on existing edges, otherwise we are talking about very different tools like a knife, or polygon splitter, etc. Which of course we should also have, if we want to have a full featured modeler. And like all tools: they don’t have to be used by those who don’t want Ngons or whatever.

Sometimes I want to do the paste later, or on a separate session of Rhino, or _CopyToClipboard (a subObject), close the file and paste it on a newly opened file. Or I want to use _Cut instead of _Copy.

There’s no reason for this extra friction.

I have _Copy set to control-alt-C on my keyboard options, I use it all the time.

This makes sense for now, I instead did:

set to control-alt-C so that makes more the function of a _CopyToClipboard.

Still, I think we need more sanity and consistency here. I don’t have to have to use Control C sometimes and Control-alt-C some other times.

I almost never use control C anymore, come to think of it. _Copy can do what it does, and more.

The only time I use _CopyToClipboard is to move stuff between the WIP and Rhino 6.

Ah, that’s right. The other time I use _CopyToClipboard is to save some work to paste, right before I hit undo a bunch of times.

I just to say that sud-D ref is fantastic tool

How do I make this partial loop selection flattened as a straight line between the first and last point of selection (like shown in green)?

Thanks Gijs, that makes more sense. Of course if you have a series of 10 loop selections across a model, you’d have to do this 10 times, and what’s even worse: you must rely on a tool that needs snapping (and could possibly miss-snap) to do it, so we have an approach that is both extremely labor intensive and very prone to user error. We need to do better

We need to do better

Would be nice if this worked on edges too

Literally opened this thread as I was aligning control points manually.

It works great! First attempt I just ran it, picked points, picked a circle, and bam!

Almost a perfect circle right where I need it.

But to get a really good circle in subD we need a way distribute the control points evenly around the circle. So in this scenario, I’m still doing it manually. (Note the bump at about 1 oclock on the hole in the pic above, versus even spacing in the pic below, Subtle, but it matters.)

Is there a way to snap control points to nearest point objects already?

Should we ask that aligning points so they’re evenly spaced be built in to _TestAlignControlPoints?

(rough script, no guarantee it will work perfectly but so far seems to work)

Works most of the time.

Sometimes it stacks two adjacent points and then leaves a double space between two other points. So, like, with 9 points, the result will appear to be 8 spaced evenly along nine divisions, with a gap.

In my case it’s easy to spot the double point because all my surrounding faces are quads. I just find the triangle, space the points out a little, run the script again, and the result is good. This seems to be about 1/4 of the time so far. I bet the less complicated the mesh is, the more it will work. In a bunch of cases this will save me tons of time. Thanks!

The reason is that the script fits a circle, then divides this circle and pulls each point to the closest point.
At first I tried to do point by point but a loop of points is not organized in a logically ordered fashion.
I might try to first pull the points to the circle and then do a second move of each point to the closest division point.
For the moment if this happens you can move the point that fails a bit and run the script again.

Yeah this is already super useful. I kinda figured you were counting points, then dividing the circle.
The other thing it does is draw the circle, which, when it glitches, is a great thing to have to snap to. It also tells me which of all the circles I’ve run the command on.

And we also missing very import command : Topology command,Topo snap on mesh,symmetry axial.
I would like to replace Tspline by subD in Wip 7 but It’s impossible at present. 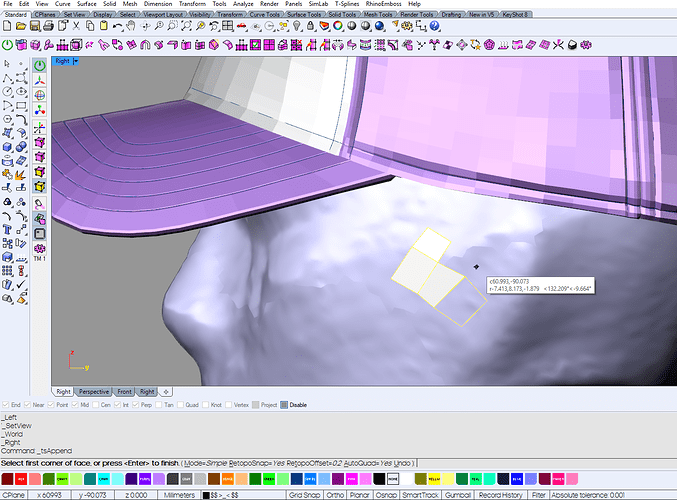 you can do this already-

make sure vertex snap is active in osnaps- then use single face with the append option and the multiple face option selected in the command line- for axial symmetry use reflect.