Clayoo messes up my layer manager

In Rhino 6, Clayoo messes up my layer manager.
After Turning off the loading of Clayoo, it worked well again. So this is definitely a Clayoo problem. 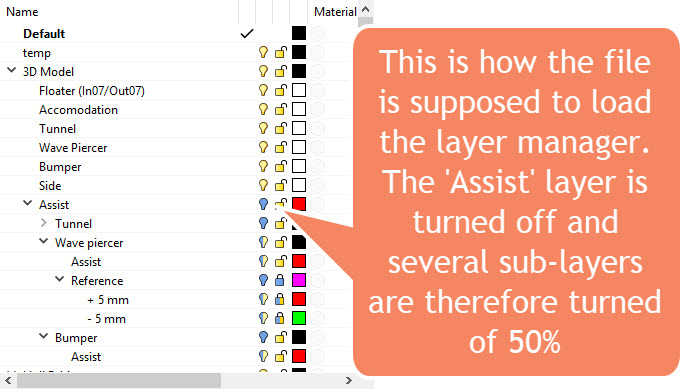 This is how it looks like when Clayoo is loaded: 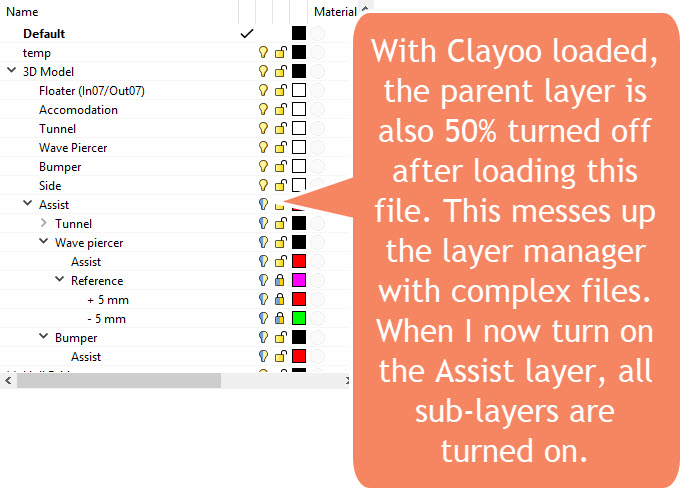 Thank you for the feedback, can you give us the Rhino version (_About command) and the Clayoo version (_ClayAbout command)? I’m pretty sure Clayoo only works with layers when loading a Clayoo File, has your file Clayoo Objects? Do you have Clayoo enabled (using _ClayEdit) when loading the file?

@Xavi_Marrodan did you know about this bug?

Hi MP, thank you for replying.

This is the name of my Clayoo installation file: Clayoo_2.6.18038.4
Currently I have Clayoo disabled. When I enable Clayoo the unwanted behavior starts again instantly. 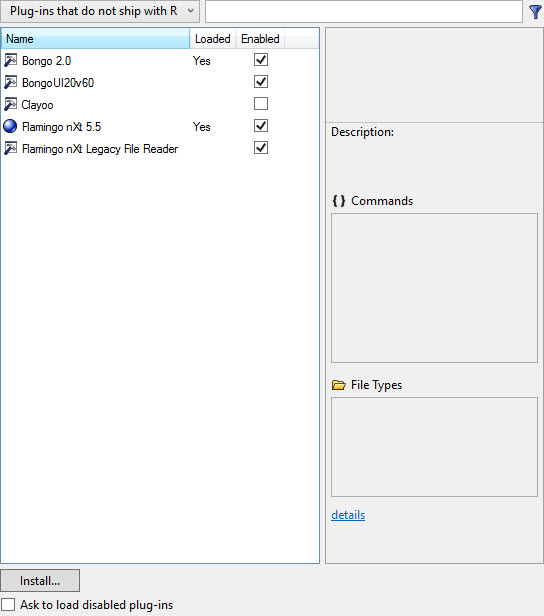 We have been trying to reproduce the layer problem you are having with no luck. Everything seems to work fine, and we are using the same version.

Is it happening with other files? May you send us one of them that is failing to check it out?

I have the same issue. Plus, starting Rhino is slow and I get a message saying File “C:\Users…\Toolbar\Clayoo.rui” is already open

I deleted and re-installed clayoo but the message appears again?

Here’s an old thread of the same issue where someone had a trial license installed and after deleting this trial apparently it worked.

All layers on when opening a rhino file Rhino for Windows

Hi, Whenever I open a Rhino file, either my own or from someone else, all the layers default on. I thought this was standard to loose the layer states, but have recently found out this is not the case. I have searched and cannot find anyone else with this issue, is there a tick box I’m missing somewhere? Does anyone else have this issue? Ignorance was bliss, but I could save a lot of time by solving this. Thanks in advance, Paul.

May you send all the information to support@tdmsolutions.com ? If you have files with this problem It would be very helpful to attach them.

How long Rhino takes to start? Can you send us a video with Rhino starting?

… sometimes it takes up to three minutes to start. Your colleague Guiilermo Sotomayor experienced it last week.

I need to try out when exactly the layer issue arises.

Also, I have an issue with the isolate objects command which hides the selected geometry instead of hiding everything else.

The isolate issue occured once I created geometry with Clayoo. The command worked as expected just before that, same file but no Clayoo Edition mode yet.

The last thing that really doesn’t solve my problems is convert to Nurbs. The T-Splines equivalent command was actually useful. Let’s say on something like a cube, it would create 6 surfaces with the corners on the singularities. Now in Clayoo, I’d have to select the surfaces I want to combine, make a polysurface, extract edges in Grasshopper and rebuild one single surface from curve network. Maybe there’s something I didn’t understand yet but so far I’m struggling with this software

Hello!
I’m Having the same issue here, all layers became half visible or half locked when opening any file, if Clayoo Plugin it’s enabled.

It also happens when i have files inserted as linked references.

Thank you for your feedback.

@mpcarlos87 yes, this problem happens with all files, no exception.
I’ll send you the file

Also, all my layers change from hidden or locked to half hidden/locked when ever I import/insert a file or update a block reference.

Before importing or updating a block 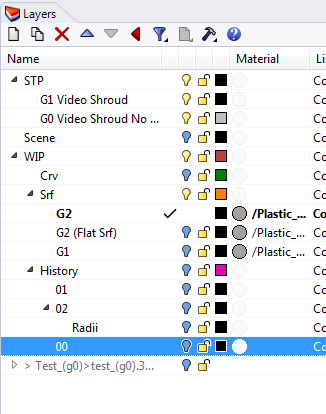 After importing or updating a block 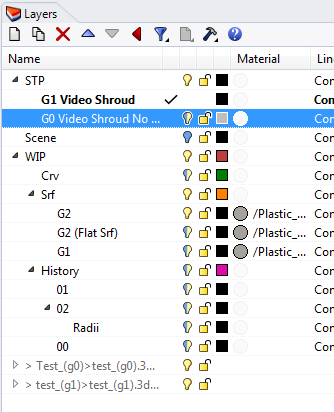 Did you receive my files?

Yes we are looking to it!

Do this files have any special configuration? Each time I save a Clayoo Object in there and load the file again it becomes a block instance.

I believe i did Nothing special to It, i get that bug even if i’m not using Clayoo models, when ever i create a new file that how it’s been working. i could send you the template file Rhino uses when opening the software to see if it’s the same problem with the default templates.

I tried with the default template I have and this doesn’t happen, I think is something related to this file.

About the layers thing we are trying some changes and we will let you know once that’s fixed (hopefully really quick).

I couldn’t replicate the issue you mention, Clayoo objects stay as is. when opening and closing files.

I notice Clayoo doesn’t like Rhino block updates.
If a clayoo model it’s on the same layer as one block, the clayoo appears as nested inside that block, then if you update the block again the clayoo model disappear.

I notice Clayoo doesn’t like Rhino block updates.
If a clayoo model it’s on the same layer as one block, the clayoo appears as nested inside that block, then if you update the block again the clayoo model disappear.

Did you know this @Xavi_Marrodan?

I’m pretty sure we didn’t have that reported before (I assume not everybody works with both approaches at the same file). We will take a look to that.

@daniel.chavarria @Gerard @martinsiegrist we just published a new version with a fix for the layers. They shouldn’t change now when loading a file. Thank you for your feedback and enjoy Clayoo!

Thank you! problem with the layers seems to be working now!

could you replicate the update block merging problem?

About the block problem we are not sure what could be so we will keep looking and try to fix it asap.