Can 3D Rhino files be used in Maya and Blender for animation?

I know Rhino is a professional technical and engineering software, and it is not originated as a platform for animation.

Well, are some particular 3D objects of Rhino (that are made with Nurbs or Mesh) capable to be imported into Maya or Blender to be used for animation?

Make sure you save your 3dm files with Rendered display active, then use my import_3dm add-on for Blender to import into Blender.

I read in an article recently that Maya uses NURBS, as well (of course for animation purposes). The question is that:

Is NURBS of Maya the same as is used in Rhino? So, can some operations be done on the NURBS of Rhino in Maya (as it in Rhino is done), or there some differences are?

I also read there, for creating motion to the limbs of a character (like lips and eyes) in Maya the user has to create some “edges flow” on the object. Can such changes or conversion be done on the Rhino objects in Maya?

I don’t know Maya at all, I only know Blender (starting typing code for it in 2003) and Rhino.

I don’t know Maya as well and have not worked with yet, but I wanted to know the relation between the great Rhino with that software.

Well. I pose the question about Blender:

Can some operations be done on the NURBS of Rhino in Blender. In the other word, are Rhino 3D objects operable in Blender wholly?

As I read, Blender can be used as a 3D animator software that works with Nurbs as well. So is Nurbs in Blender the same Nurbs in Rhino?

My import_3dm add-on does not import NURBS, but the render meshes created for those.

Thank you so much, master

Hi Nathan. Is this plugin to export from Rhino to Blender available for mac also?

Nurbs or Mesh) capable to be imported into Maya

After googling quickly: Maya can import the IGES format, which Rhino can export.
Looks you might get your NURBS data across.

I started working with Blender for a while and advanced a little. I even imported a dolphin that I made in Rhino into Blender ( as Nathan guided me), and it worked. The .3dm dolphin turned into the mesh in Blender but due to my low experience in Blender, I couldn’t reduce the number of meshes (doing remesh) to do some work on the object.

Generally, Blender was a tangled software with a lot of nested and confusing commands to me, while I always worked with the neat and geometrical engineering software that Rhino is the best. Although Rhino is a complicated engineering software, its toolbar and commands are neat and orderly, and learning and understanding them is easier than graphical software like Blender.

Blender made me tired, and I finally ignored making animation and left it after a few weeks, though it still is on my system. It is unclear whether I work with Blender or take it away forever, but I don’t think I will go back to it.

Yes, I use it on my M1 laptop, even as a native build. Just go to the page linked below and check the latest release: 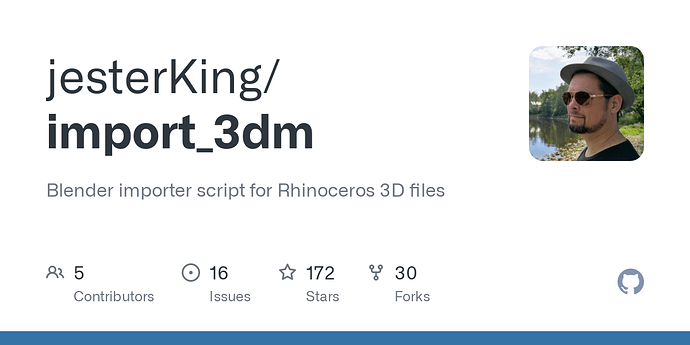