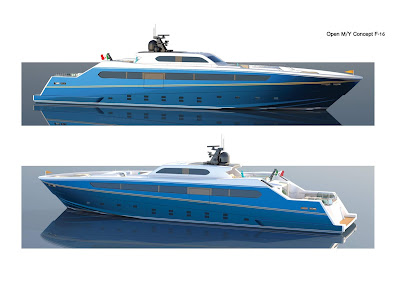 Camillo De Gaspari (Camdesign), Yacht Designer, has been kind enough to share his 3D Design workflow with the Rhino community:

"Most of these concepts have been sketched on paper and then made as 3D models, and then redefined, in this case, inspiration came from various sources like a trend in the design world or the shape of an animal. When working starts from some specification or requirements from a customer, we speak of a conventional design spiral.

Rhino and its suite of plug-ins have been a very effective environment for creating these concepts. It can easily import and read most of the file formats used for the engineering of boats and larger, more complex projects, that require more participants and complementary software.

YD requires a multi-disciplinary approach and the following is my usual workflow. When 3D modeling with Rhino that is the main part, Naval architecture is already consistent thanks to the use of Orca3D marine plug-in. Sometimes after modeling, a mockup of the boat might be sent to a 3D printer.

2D drawings can be generated and printed with very little effort from inside Rhino. Then I proceed adding textures for the rendering engine (Flamingo, V-Ray or Maxwell to name a few) and then I follow two different pipelines if working for an animation or for a still rendering. In the first case, I have utilized both the Bongo plug-in for Rhino or external programs like 3ds Max to add the kinematics. Then after rendering, the sequence of frames assembled in a video. Still images (or single frames) instead, allow for more post-production effects like multi-lighting or photo editing with a dedicated and well-known software like Photoshop, but there are also a good number of alternatives to this software especially on Mac.

I tend to add a good amount of details to 3D models of small crafts and yachts, not only because they look more realistic but because there will be less modifications to be made during the executive phase and the construction of the project."