Thanks for answering. I have installed AutoCAD 2019.

I am having the exact same issue as @franco.crudi was having here.
I cannot seem to get the build talking to AutoCad 2019 which I have installed on my system , any help would be appreciated, this is the error I am getting… 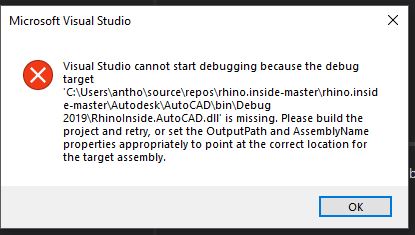 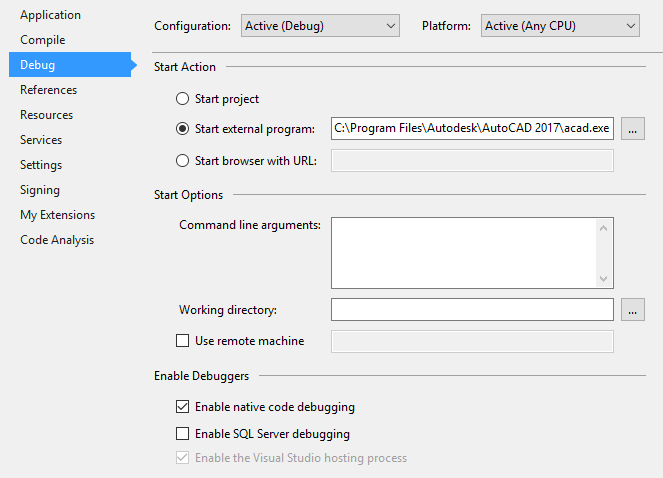 Thanks for that, I am totally new at this.
I made that change an ACAD launches which is promising! but I still get something like 30 errors in the build.
I am thinking that the problem I have is that when I use Netload in ACAD, I cannot find the .dll file that is needed.
Which I think this VS2017 project is building?

thanks so much for your help again

Found the issue,it was the reference paths! now it builds with no errors,
but when I run TestRhinoInside in auto-cad nothing happens

Will RhinoInside work on AutoCad 2016 Basis?
I got the following error while compiling:

AutoCAD 2016 supports .NET. So there shouldn’t be any reason why you can’t get the project working.

Keep in mind the project was build for AutoCAD 2019. So you’ll need to do the following to get it to build:

1.) In the project’s properties -> application, change the target framework to .NET Framework 4.5.
2.) The project references 3 AutoCAD assemblies (accoremgd.dll, acdbmgd.dll, and admgd.dll). You will need to re-path these to your AutoCAD 2016 install location.
3.) Maybe more…

yes, I changed to 4.5 and also updated all AutoCAD assemblies.
Still the same error.

What should be added in the Post-build events? Regular code renaming .dll to .rhp?

What should be added in the Post-build events? Regular code renaming .dll to .rhp?

Nothing, the project builds a plug-in for AutoCAD not Rhino.

Thanks @dale , it works now.
After running command in AutoCad, geometry (from TestCommands class) is being added.
Now the question: is it possible to open Rhino, similar as in Revit? Final aim is to get updates in AutoCad after these are completed in Rhino.

Now the question: is it possible to open Rhino, similar as in Revit?

I have no idea what this means. Can you provide more details on what you want to do or what problem you are trying to solve?

Also, keep in mind that AutoCAD can read Rhino 3dm files. Likewise, Rhino can read AutoCAD dwg files. This is not the case with Revit.

Hi, sorry but we are not able to find the RhinoInside.AutoCAD.dll file in our computer as per below image.
we are using autocad 2019 & want to use it in Rhino WIP.

Hi, We came to point no 6 as per image below but nothing happnes after this. how we get Rhino inside Autocad.

Have you cloned the repository and built the project?

Yes, sir we finished all steps, but we didn’t get rhino panel inside autocad. After we did all steps we only got one sphere.

After we did all steps we only got one sphere.

Yep, that’s all the sample currently does…

Sir, are there any other command to run rhino or grasshopper in Auto cad? If not then when it will explore more commands?

are there any other command to run rhino or grasshopper in Auto cad?

If not then when it will explore more commands?

I can’t answer this. It’s an open-source project and anyone can contribute to it.

The sample code you reference is just that, a sample of how you can run Rhino from inside of AutoCAD. The sample code doesn’t have any real functionality, other than a simple test command that shows how to wire all this up.