[Wish]: That spaces remained the top most object, this is especially practical in small bedrooms where the bed ends up covering the Space Tag. My solution is normally to lift the Space Tag up in Z, but that an extra step I’d love to avoid.

[BUG] Updating multiple 2D drawings creates all kinds of weird errors, while updating the drawings one by one works perfectly.
[BUG] Since update, updating 2D plans is very very slow on some models. This might be due to some new tolerance setting?

@rheinason we have sent you a version that fixes this issue by email.

[WISH]: Extend for both Columns and Curtainwalls. To me, it seems that it would be quite simple to implement for columns. 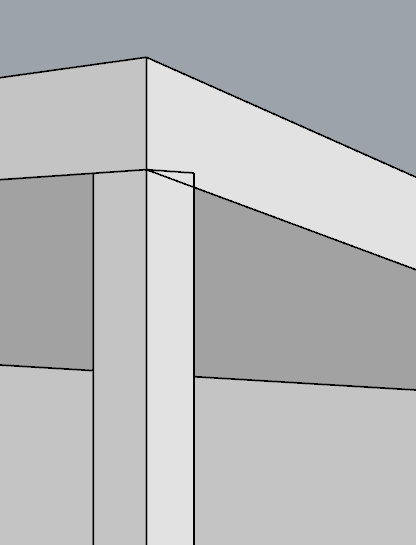 @rheinason this is already in our wishlist. I’ll let you know when we add this feature. Meanwhile you can use the vaSubtractSolids command to trim out the upper part of the column so it fits with the slab.

[WISH]: Ability to show which way a doors and windows open in section views, like the way it is shown in the opening elevation.

[WISH]: Adding a different default Format with tags, this would be practical for creating Fire Resistance plans and other specialized plans where the addition of parameters that each component contains would be useful.

[WISH]: Ability to show which way a doors and windows open in section views, like the way it is shown in the opening elevation.

Ok, I take note of this wish for the future versions. You can actually achieve that creating a door/window from a “Grasshopper style”, so it generates the representation of the opening side on the 3D geometry, but I guess it would be more helpful to have that option integrated in the native VisualARQ doors/windows.

You can already achieve that playing with the “Aperture (%)” and “Max Aperture (%)” values of a door/window object, that corresponds to the Max Aperture of the object in plan views, and the aperture of the object in 3D views.
However it is true that you cannot show a swing opening closed in Plan view and opened in 3D with those parameters. But you can achieve that using a 2D block for the 2D Plan Representation of that Opening, (or of course, using a custom Grasshopper definition that shows the opening as you want). 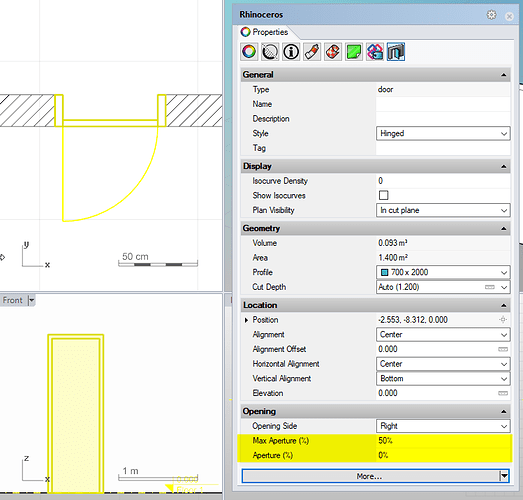 Adding a different default Format with tags, this would be practical for creating Fire Resistance plans and other specialized plans where the addition of parameters that each component contains would be useful

That can be already achieved by typing the desired Property in the Tag format. But so far in only accepts certain Properties, like “style”, “name”, “width”, etc… but not custom parameter like “Fire resistance”. In this case you just can remove the tag format and write whatever you want on that field. Take a look at this post for more information: http://www.visualarq.com/support/tips/can-i-put-the-object-dimensions-or-other-information-inside-tags/
I’ll let you know when there are improvements on this subject.

[WISH] : Ability to select more than one style in the styles dialogues, for easier deletion/cleanup when creating new Template files. 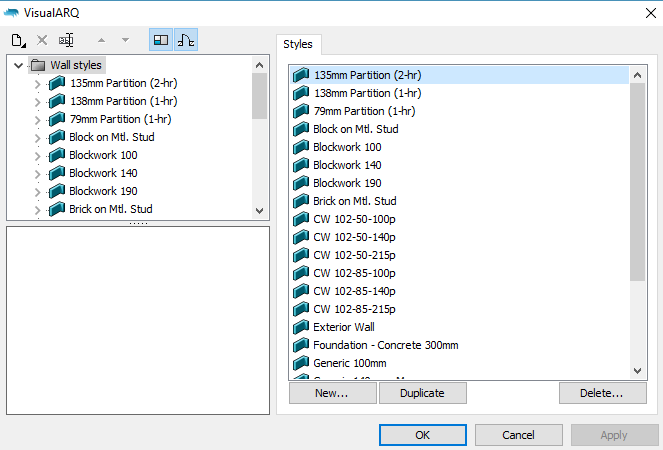 4 posts were split to a new topic: Bounding box issue

Ok, request added to the wishlist!

2 posts were split to a new topic: About level naming in VisualARQ

A post was split to a new topic: Locking to an axis does not work on VisualARQ walls

I’ve closed this Thread due to its length.
If you have a bug to report or new requests, please open a new thread.

Section Arrows and styles in VisualARQ millimetre template are only one millimetre:

@rheinason this issue has been fixed in VisualARQ 2.1.1 version.

@rheinason, Curtain walls are detected by Spaces since VisualARQ 2.1 version!

[BUG] In “centimeters” template (RC4) text in annotation styles is scaled in meters.

We have fixed this error in VisualARQ 2.3 (VisualARQ 2 - Version 2.3 released)

Extend for both Columns and Curtainwalls

@rheinason we have added the option to extend curtain walls vertically in VisualARQ 2.6: VisualARQ 2 - Version 2.6 released

Hi, VisualARQ 2.8 is now available for download. This release includes some new features and solves most of the issues reported by users. Please report any problem or suggestion here or send us an email to visualarq@asuni.com. Here is the list of changes: NEW FEATURES License: #7821: Cloud Zoo support