Hi, not sure if this is a bug or a very strange feature, but on the Properties panel when I set the Isocurve density to 0 and then turn it off, it gets greyed out and change into -1 (minus one). Then I turned on the Isocurve density and tried numbers such like 1, 2, 3 etc, but after turning it off again the number changes to -1, -2 and -3 (with a minus before the number). It’s kind of confusing, because when it’s 0 it changes to -1, thus it will not show the actual number that was turned off just before that (like the example pictured below). 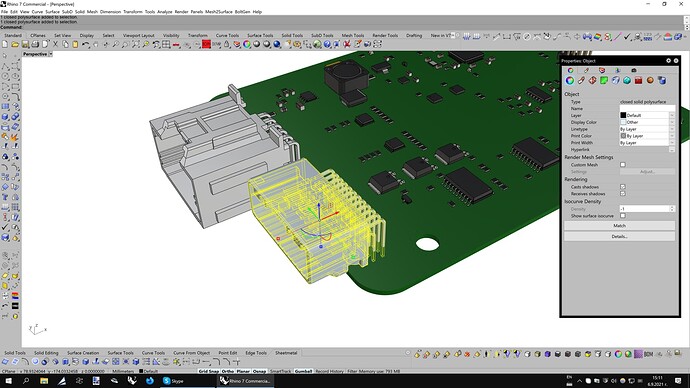 But a problem arises when the density is set to 0. Because -0 (due to the method used internally to represent integers) an isocurve density of 0 is set to -1 to turn it off. The downside of this is when the isocurve display is toggled from off to on if the density is -1 it is changed to 1 even if it was originally 0 before display was turned off.

Yeah, it’s pity that when I set the isocurve density to be 0, then turn it off and turn it on again, it automatically changes to 1. This problem is especially big when I have a bunch of objects with different isocurve settings and then I want to temporarily show their isocurve to sheck something about their shape; then at the moment I turn off their isocurve, any surface that previously had Isocurve density of 0 now loses that setting and has a value of 1 instead. Then it’s impossible to guess which object had 0 isocurve density and which had 1.
For example, if I have 3 objects and set their Isocurve density to be 0, 1 and 2, respectively, then select them all and click on “Show surface isocurve”, that will hide their isocurves. However, at the moment I click again on that option, these object’s isocurve settings will be changed to 2, 1 and 2, respectively (the object that previously had isocurve density of 0 now changes its value to 2).