As soon as I set the path to our network drive, it takes around 4 minutes to read the file (the file itself is less than 1MB). 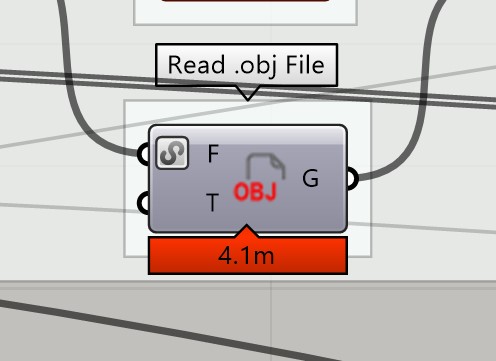 I guess its the same issue as here: Reading files from Network Share Bug

I have a read file component that is in Python and that one works fine.

As I mention in the other post: literally all our assets are on the file server and work fine. Gigantic rhino files, images, videos, etc. work just fine in any software. But using the normal Read File component and apparently the pancake Read OBJ component all make GH freeze for a few minutes.

Read OBJ uses Rhino’s OBJ importer plugin. Therefore the issue might be in Rhino”s code. I will look into it later.

As a workaround, I can make Pancake able to cache remote files before importing.

( also the reason why I didn’t see your post)

will send you a beta patched version in a few days.

Thanks very much. I was actually thinking that normally you answer super fast. No worries its nothing urgent and I just copy everything to my local machine for now.

I remember that David Rutten was looking into it as well and saying the same that it must be something on the Rhino level. The normal Read File component has the same bug for many years already and has never been fixed. Someone made a super simple script version which I have saved as a user object and always use instead. You can see the difference here:

Anyways, hope its nothing too serious with the hospital stuff and you get better soon!

Pancake has a component named Import TXT, which might be helpful if you are importing text files (as it is able to handle encodings)

I’m recovering from pneumonia and luckily it’s the old one, not the C-word type … Should be able to have some investigation this Sunday.

I guess the delay is because Rhino reads the obj file object by object, which creates tons of network requests. iirc read file also reads line by line even if the entire file is selected.