running into an issue with another app that i use exported dxf’s in. a function in the program isn’t working properly because the text’s insertion point isn’t lining up with my geometry correctly in the dxf like it does in rhino. rhino is moving the text slightly on export.
EXPORT TEXT ISSUE.3dm (401.0 KB)

below is an example and a file to look at. thanks 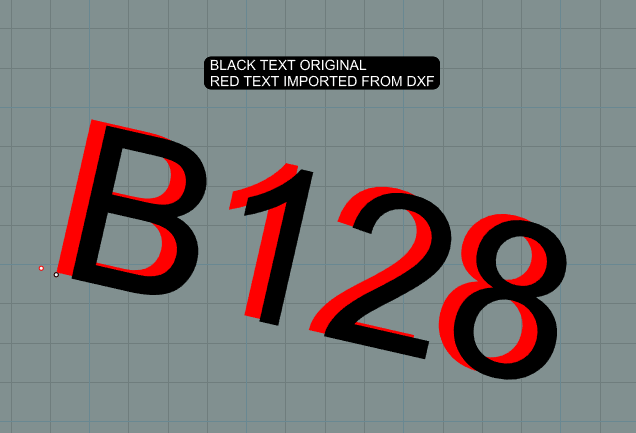 Checking it, thanks.
@kleerkoat - here, if I round-trip via dxf the import comes in right on top of the originals… SelDup finds them… I used the 2007 Natural dxf scheme.

@pascal this is using R12 natural

I see this.
I’m checking with the developer to see if this is expected because of how old the R12 format is, of if it’s an unexpected problem.

He says this is expected because of the old AutoCAD text format.

Is there some reason you can’t use the newer DXF format that does not shift?

the curves are fine, the point is the problem. i learned of a feature that would save us hours of work a day. the software picks up text that matches a string and uses the text’s insertion point intersection with a curve and inserts a tab automatically. now we have to edit each tool path manually in their windows 95 software. and if you looked at the file that is a lot of manual editing.

tldr; i’ve tried every other file flavor of dxf out of rhino and none of them work.

@pascal, @John_Brock here is an old post i made about it

I do not have a good fix for you.
If you can determine the distance and direction of the offset, perhaps you can shift them before exporting to DXF, thereby working around this ancient (1992) file format limitation.

ok, i’ll script something up. ty