I have a file with 4 blocks: 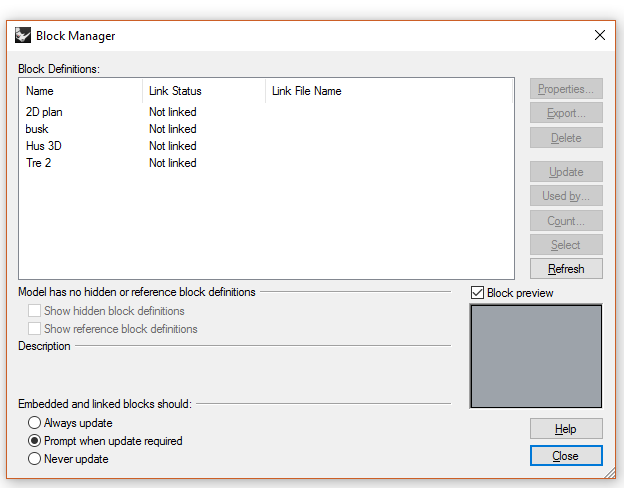 If I copy one from “a” to “b” then that works fine.
BUT if I try to copy-paste then V6 asks me which I want to use:

There IS no linked file, so why does it ask?

Hi Jorgen -I’ll test but I believe ‘file’ simply means ‘incoming’ here. Granted it may not be the best choice, I think the user experience of pasting was not really considered…

Hi Pascal.
It IS the block from the current file that I am pasting, so there should not be any issues as there is no conflict…

By the way, here is my take if it was a conflict:
When pasting a block from “Rhino A” to “Rhino B” where there already is a block with the same name then I would expect a popup with the ability to replace all existing blocks with the new one, rename the incoming one, or replace the incoming with the existing block.

It IS the block from the current file that I am pasting, so there should not be any issues as there is no conflict…

Yeah… but that is what I meant- the user sees Paste as bringing in the exact same thing, but I believe the actual mechanism is the same as importing a file.

Well, then I am 100 % sure it is a solvable task to compare the two blocks to figure out that they are identical

To me V5 is much better, but V6 will be superior when it figures out if it is the same block and asks the user what to do if it isn’t.