Rhino’s Blend srf does not respect conditions at the extreme surface.
It is true that you can adjust the handles, but it is inconvenient and imprecise.
With Xnurbs the connection is perfect, as you can see.

(even Xnurbs does not respect the conditions at the extremes: continuity is only of position, to be precise).

Maybe it’s not the srf blend’s fault, something else should be used …

I do not know why you would try to do this that way in in Rhino, just use the tool correctly. 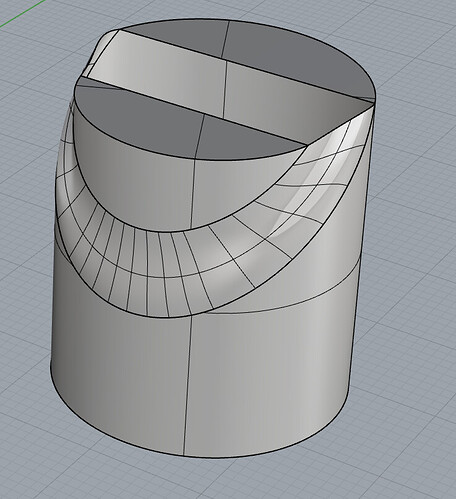 Yes, you’re right, I was wrong.
To claim continuity in G1 or G2 at the extremes, would it be madness, in this case?

I and other people often requested this feature for years. Plus many others regarding vast improvements of “Blend surface”. Example:

Hi there, Currently I’m using Rhino 6 Evaluation and I managed to find several bug in the program that were not present in Rhino 5. I have 3d Connexion SpacePilot (the old discontinued model, not the more recent “SpacePilot Pro” one) that works flawlessly in Rhino 5, but in Rhino 6 I noticed that 3d Connexion’s automatic rotation center no longer can “see” through solids and surfaces that were given a custom “wireframe” viewport setting through the “SetObjectDisplayMode” command. This bug is…

This is how you can achieve G2 continuity on the upper edges of your model, while we wait for a smarter “Blend surface” to be implemented in Rhino 7 SR6 (hint, hint

). Hold Alt to be able to rotate the end handles and snap them to the extended lines to set the same direction for continuity of the blend surface. 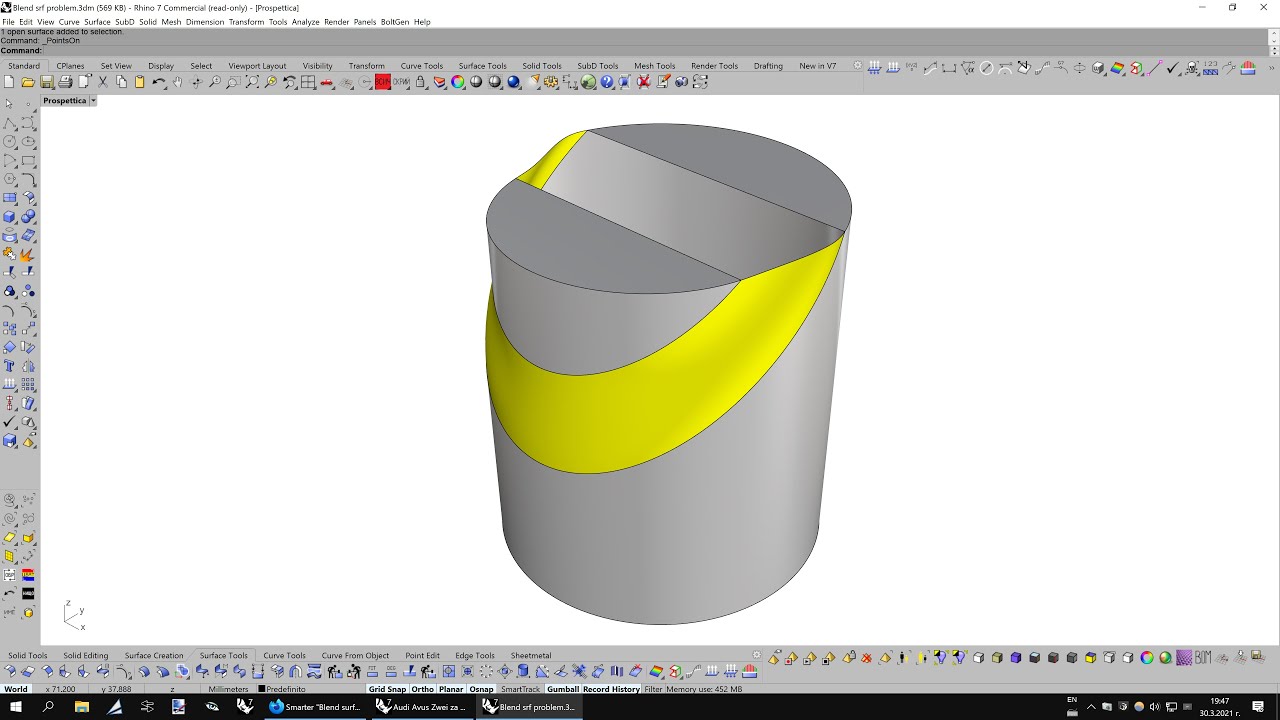 Perfect, that’s what I meant.
It should be an automated operation done by the command.
So my question wasn’t that trivial!

So, you basically need a “Match handle” option included in “Blend surface”?

I would gladly sacrifice some screen space to have that amount of options:

Bobi, wanting to try to use the blend srf command with a chain on the entire edge, it seems to me that it is not possible to connect the two portions: one edge remains open.
This example could be interesting to give developers an idea to improve the command.

Bobi, they should hire you at McNeel.

All the options of the blend command would need a general overhaul. Currently the command works, but it is far too “basic”.

I also noticed that. It lacks a “Closed” option like the one found in the “Loft” tool, for example. However, it would work best for adjacent surface edges that are at least tangent to each other.

I was able to make a second Blend surface between the top surfaces and then applied “Match surface” with the “Position” option. “Match edges by closest point” must be turned off for this to work properly.

I tried to make BlendCurves (G1, G2, G3, G4) but all of them seems to deviate from the tangent straight paths (white) from the second curve point onward.

I thought that G1+ would line up along the tangent line, but that doesn’t seem to be the case. Where did I get that idea from? < Scratching head>.

I do agree with you about the urgent need to upgrade the “Blend surface”. It could be a much more useful and reliable tool than its current implementation.

I would like to say that the developers are working on improving this command;
future, “class A” enhancements are planned, similar to those of the defunct VSR plug-in.
We look forward to … surely we will see all this in Rhino 8: now Rhino 7 is what it is!

Another huge improvement would be on “Match surface” to include an option called “Preserve structure” (or selecting one of three options: “Default”, “Keep edge” or “Keep tangency”) so that when using G2 continuity it will only adjust the control points normal to the surface but NOT along the UV directions. that would be very useful for any scenario where the edges at either side of the matched surface edge must follow a round shape. Currently, G2 continuity of “Match surface” will try to straighten the 3rd row of control points and that heavily reduces its usability.
Wish: "Match surface" to preserve the flow of control points

There is a hope that it may be included in a future service release of Rhino 7, though:
https://mcneel.myjetbrains.com/youtrack/issue/RH-58712?project=RH

You are the best!

Just sharing my thoughts of what would make the modeling process in Rhino easier, because “Blend surface” and “Match surface” are the major tools used to achieve Class-A surface modeling.

Of course, other Rhino users and the “McNeel” team itself may have different priorities about various other tools.

The current modeling tools should be improved even if the priorities are other (SubD, rendering and so on).
Blend srf and Match srf are essential for a Nurbs modeler of a certain level, otherwise Rhino remains a Cad of series B not in step with the times.
The “blend srf” has improved little compared to that of Rhino 5; it is not enough to add an option and improve the aesthetics of the command.

I completely agree with you. Lets not forget that the NURBS surface modeling is the primary reason for the existence of Rhino.

With regards to “Blend surface”, I will add my comments in the main topic about that tool that I started back in 2018, whose link I posted above, because I think that this is really one of the most important tools of the whole program and it needs vast improvements.