Best Practice for changing a model

I’ve been using Rhino for a number of years now and am now teaching it to another. This has me reflecting on best practices more and more. I wonder if I could get your input on how to make this change.

So I’ve got this part I want to 3d print. 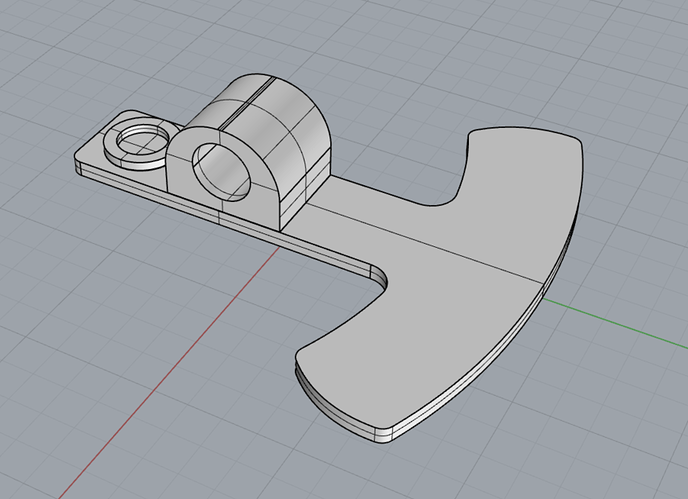 I broke the part so I modeled in a rib to make it stronger. 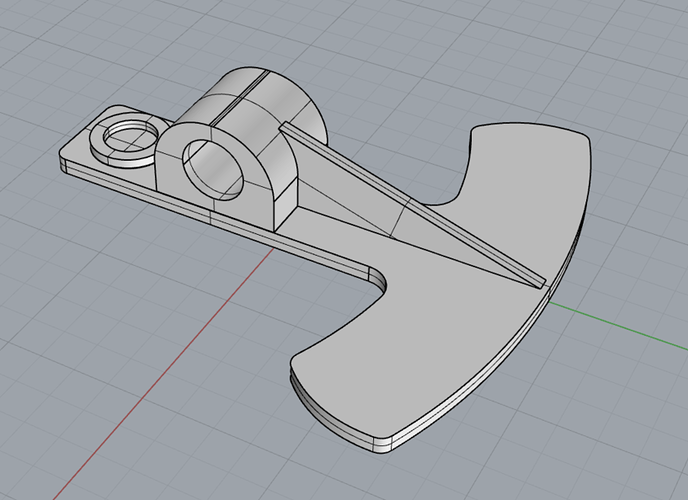 I’m sorry I’m not at my pc so I can’t show you the process but it’s time to understand the magical properties of Trim and Untrim.
with Untrim, rhino will give you back the original srf.

so you don’t need to create any crvs, just trim the original srf to the mew shape.

when you trim a srf you’re not changing it but only “hiding” the trimmed portion.
it’s like masks on Photoshop.

Thanks for the reply. Trying that real quick performs the same as solid delete holes command which I see is “untrimholes”. The results are not very good on this model. If you could check it out when you get a chance and see I would be very interested to hear your thoughts.

Edit: when I explode the model instead of shift ctrl click deleting the rib it works better. 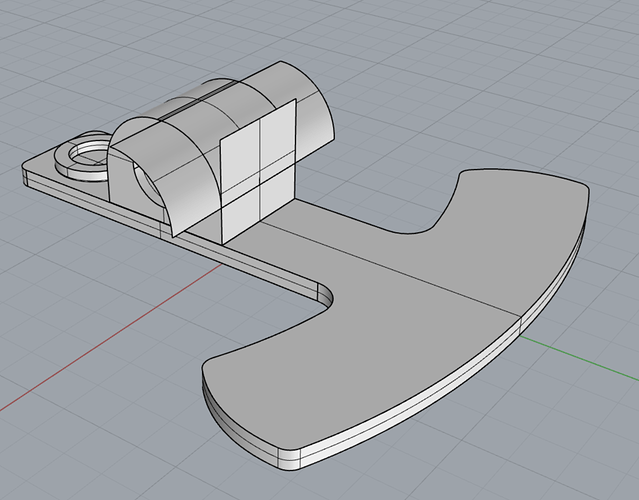 Is this what you expect? Would you then trim the extra surface with the bordering surfaces and make solid? Definitely a better workflow.

I untrimmed the slit hole on the cylindrical part (as mentioned by @skysurfer) then just filled the other slit holes with surface from 4 points (untrimming those would also cause the geometry to be untrimmed internal to the cylindrical part which we don’t want). Then I join everything and merge all the faces with “_MergeAllFaces” to remove unnecessary internal edge on the planar faces caused by the filling surfaces from 4 points. 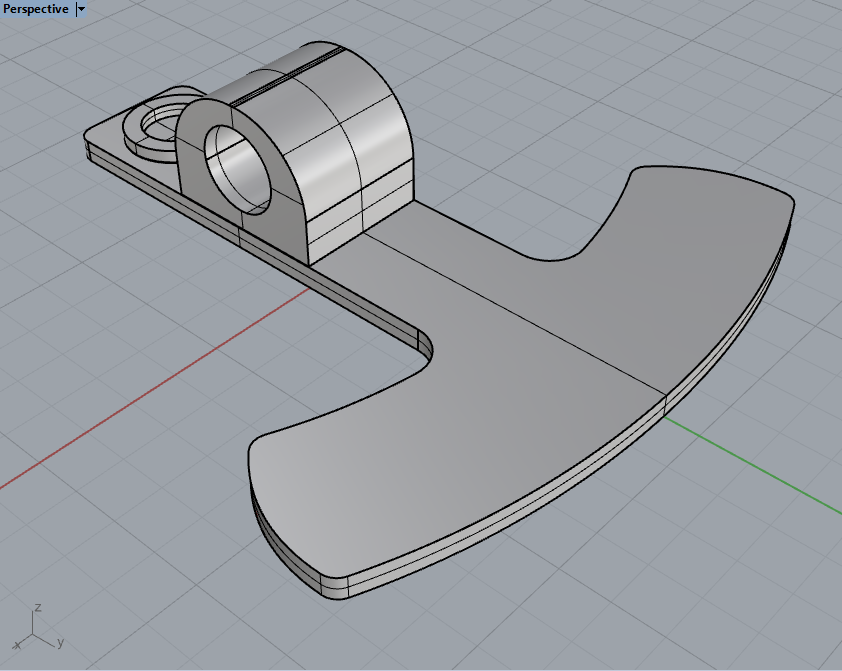 “_MergeAllFaces” is an excellent command I didn’t know exists! Thanks guys!

ExtractSrf can be useful to extract individual surfaces from a polysurface without exploding the entire polysurface. Delete extracted surfaces which are no longer needed.

I save numbered sequential versions of a model to enable backing up. After a group of changes to a model I use SaveAs with a number manually appended to the file name. Typically I use two or three digit numbers, and increment the first or second numbers when major changes. The saved files might be
Project010
Project011
Project020
Project021
Project022
Project100
Project101
etc.

I tend to do this with layers but it gets messy. Good tips!

I copy, move over a 100 units in either direction and hide the previous revision models. No need for new layers or new files.

Edit: when I explode the model instead of shift ctrl click deleting the rib it works better. 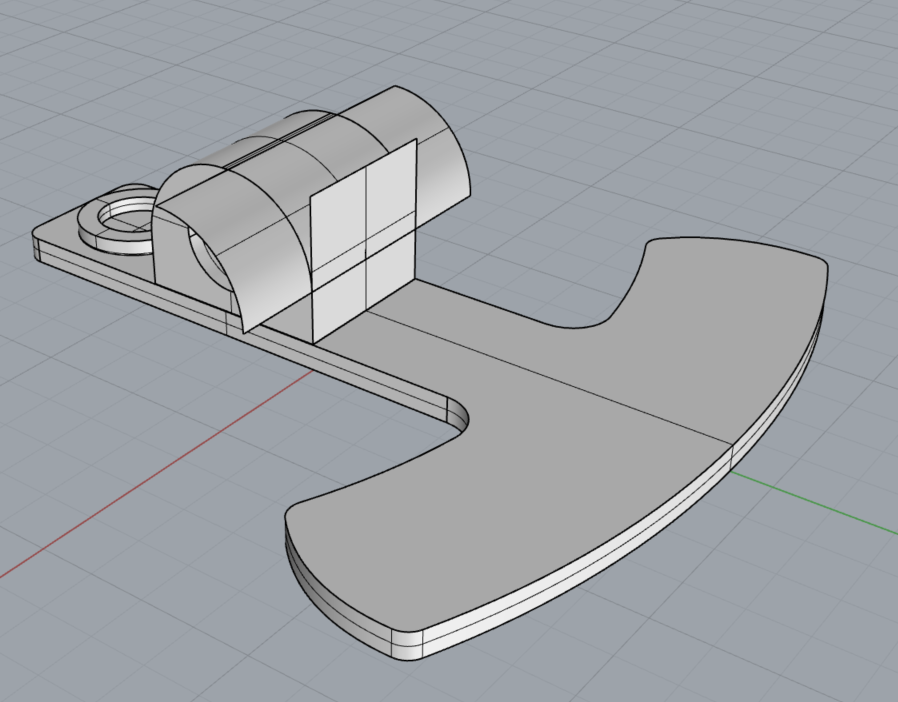 Is this what you expect? Would you then trim the extra surface with the bordering surfaces and make solid? Definitely a better workflow

yes, you should explode it, Untrim, and trim them again. then join everything and get the solid.

sometime building new srf is faster like mentioned from @Michael_Pryor

pls tell me you’re kidding!
it’s the worst wau to model.
this way you loose all the reference, the simmetry…
No pls don’t!

Seeing that you have help reverting your part…

Generally, I make lots of incremental and small saves as I work on a project, such as:
“Diner 001”
“Diner 002”

…so they may be sorted nicely.

To keep each file atomic and separate/independent, often I create a layer stack for operations and/or make a backup layer where I just dump objects before doing vastly destructive operations to them.

I also keep the associated tools/cutters that I use for Booleans in a folder, so that I can regenerate an object for those times, when I haven’t planned my attack. Generally, I don’t want to see these negative objects littering up my project such as 36 thread cutters and counterinkers, so it’s easier to switch then off.

This is one reason why material-by-layer, is not for me.

Don’t tell me what to do and I won’t tell you where to go.

Shift+Ctrl+left-click on the side face of the rib, then choose ExtrudeSrf command. ExtrudeSrf when used this way deletes stuff, so all you have to do is move your cursor until the extrude preview covers the entire rib & release the mouse button.

This leaves some surfaces a little messy, but depending on your situation it may not matter. You can run MergeSrf to fix up the planar surfaces, and explode & removetrim on the curved part to make it better.

I don’t understand. Could you do one of those excellent videos like Diego did?

Not sure about excellent, but here’s something…https://global.discourse-cdn.com/mcneel/uploads/default/original/3X/c/c/cce0a2bc734af394f291fb6afe88220ce6b51d1a.mp4

Thanks for taking the time to make the video. I tried it exactly as you did and it did not work for me. I played with the settings several times with no change. Then I undid a bunch of attempts and screwed around with something else and tried again. It worked. No idea why it didn’t work before and finally did later. Strange.

This is a cool trick. I think of it in my future workflow.

when using extrudeSrf you have to check DeleteInput=yes to make the “sustraction”.
if you drag the surface with the gumball it doesn’t work the same way ( which is a shame)

I never used Extrudesrf that way, now I use it more often and is quite useful, Thanks @phcreates for the tip.

Interesting, Nice Quick way.
Yet trying this on the Mac Rhino, I can’t get it to work correctly, it produces a non-manifold Polysurface instead of removing that triangular rib.
Can’t tell if it is me or a Mac Rhino bug…?